Although Catherine has directed eight Capital Fringe Festival plays including comedies Jack the Ticket Ripper, Ninja Motorcycle Babes, and BUSHWA, she has a soft spot for the dark, violent plays of the early 17th century.

This year, Guillotine Theatre’s Fringe entry is Cold As Death, an adaptation of a mysterious play written in 1611. The only surviving text is a handwritten script sent to King James’ censor. No one even knows the name of the original play. It’s generally called The Second Maiden’s Tragedy, because the censor’s license stated: “This second Mayden’s tragedy (for it hath no name inscribed) may with the reformations now be acted publikely.”

Joel: Is it tough bringing a 400-year-old play to Fringe?

Catherine: Past FringeFests have been full of Shakespeare. Last year, I saw a great production of The Duchess of Malfi, my friends at Grain of Sand did a great Hamlet, and I even saw a crazy-fun riff on Doctor Faustus in 2009 – they served pretzels and beer. But Cold As Death isn’t actually a 400-year-old play. It’s an adaptation by Washington playwright Monique LaForce, who trimmed away the subplot and combined several characters to make the play darker and more action-packed. But 95% of the text is the original Middleton.”

Middleton? This play is mysterious, but you know who wrote it?

“Most experts believe The Second Maiden’s Tragedy is by Thomas Middleton. Middleton is best known for bloody tragedies known as revenge plays, especially The Changeling and Women Beware Women. We produced The Changeling in 1998. But Cold As Death isn’t truly a revenge play, even though 60% of the characters are corpses by the end. The main character kills the man who ruined his life, not out of revenge, but to prevent further evil. It’s a different motivation.  We watch a gentle, ineffective man become Machiavellian and win back his throne. But hey, the gentle don’t get far in the world. Not then, not now.”

So, is there really necrophilia in this play? 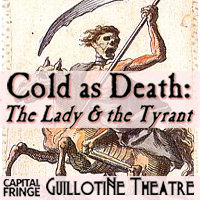 About Guillotine Theatre: We merrily push the idea that classics are visceral, larger-than-life, occasionally very bloody…and sometimes include really cool language. This is our ninth Fringe Fest, our fourth revenge play, and our second Middleton. #GuillotiNeTheat

About the Playwright: Monique LaForce’s plays include the critically-acclaimed Kenneth, What Is the Frequency? (co-written with Ian Allen), The Blizzard Comes (one of the five plays that comprised Guillotine Theatre’s 2011 Fringe Festival hit Belle Parricide), and last year’s Fringe Festival hit, Isis and Vesco Investigate the Curious Death of Dr. Freud. Monique is currently writing Hootenanny, a new work that Guillotine Theatre will co-produce with the National Museum of Women in the Arts, as part of the upcoming Women’s Voices Theatre Festival.