“It’s really important that we are able to hear our stories on the stage,” said Marie Byrd Sproul as we talked about the show she directed—Out of Silence: Abortion Stories from the 1 in 3 Campaign—prior to its run in the 2015 Capital Fringe Festival. 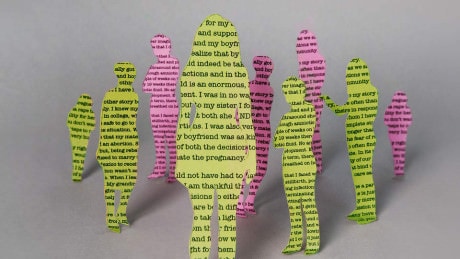 I praised Out of Silence when I saw its one-night-only iteration at The Studio Theatre in January. A project of Advocates for Youth, Out of Silence consists of short plays by a Who’s Who of DC-area playwrights based on real women’s stories about the points in their lives when they chose—as does one in three women in her lifetime—to have an abortion.

Sproul remembers the audience reaction that night: “They were fascinated with stories they had never heard told aloud before. People were really moved. It was the first time the play had been performed in front of an audience, and they really went along with us the entire way. To hear the laughter moving through the audience and then the pin-drop silence at different times and just knowing that it really was touching them—it was a phenomenal night.”

That’s likely to be the case whenever Out of Silence is performed. As I found in January, the writing is really good. “We were so lucky to get those writers,” said Sproul. “It just made all the difference.”

The nine DC playwrights who contributed to Out of Silence:

“The main goal for Advocates for Youth was to create a piece that activists could do on college campuses,” Sproul continued, “and the idea is to continue to raise awareness. So this fall a number of college campuses have signed up to do the production.”

You can catch Out of Silence now while it’s in town. 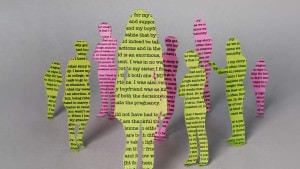 Out of Silence: Abortion Stories from the 1 in 3 Campaign will play:

The Eastman Studio Theatre in the Elstad Annex of Gallaudet University

All performances will be ASL interpreted.