The four women from Ireland who make up Celtic Woman, along with backup singers, dancers, and musicians returned to Wolf Trap for a very special performance, not least because it’s their 10th anniversary tour. The opening “The Sky and The Dawn and the Sun” with it’s booming drums and cymbals got some help from the remnants of tropical storm Bill as booming thunder and lightning accompanied the swelling music. They sang, “I open the skies and give light to the world” and the skies seemed to take them literally.

It’s a measure of the enduring popularity of Celtic Woman, which has had a variety of members since it shot to fame in the U.S. on a PBS special, that there were still fans out on the lawn a full after two hours in the drenching rain just hear them.

The performers for this evening were Celtic Woman 10th Anniversary World Tour, and Alex Sharpe on vocals. They all can pull off the signature sound of the group – powerful sopranos with a clarion sound and ridiculously high range – and Máiréad Nesbitt, a violinist who has played with them since the beginning has perfected the art of playing while dancing about the stage and directing the band.

Accompanying them were several skilled musicians including two percussionists in decked out drum pits, as well as a pianist, guitarist, bass, and piper who plays bagpipes, Uilleann pipes, and all number of flutes and whistles.

They played some Celtic Woman classics – both traditional Irish tunes and pop hits and also stuck closely to the rhythm tradition of Ireland with a traditional bodhran drum battle and hard shoe Irish dance.

After all this time, they know how to put on a show, trading solos and duets, interspersing quiet numbers and big productions, all splashed with a lighting design heavy on the greens and dramatic spotlights. Then at the perfect moment ceding the stage to Nesbitt for her to go absolutely crazy with her fiddle on a series of jigs and reels.

Carlin shined on a lot of the Irish tunes like “Newrange” and a few in pure Gaelic like “Dúlamán.” Sharpe excelled at the dramatic pieces like “The Voice.” McFadden had many of the pop songs like “Caledonia.”

Of course, it’s called Celtic Woman, but it’s most fun when they sing together on songs like the ubiquitous “O Danny Boy,” Enya’s “Sail Away,” and “Somewhere Over the Rainbow.” They all got to dance along and play it up on “Téir Abhaile Riú,” a song about a dramatic journey to Galway. They ended the evening as they have ended so many others with “Your Raise Me Up.”

Many other “world” groups have taken to the stage singing modern and traditional hits. Many other Irish groups have broken out from that small island. Many other women have launched major groups. None of that explains the enduring, almost religious popularity Celtic Woman has enjoyed for a decade. They have captured some magic all their own – a combination of feel good songs that sound amazing sung by beautiful and extremely talented women. It was another wonderful evening, made all the more special by nature’s accompaniment. 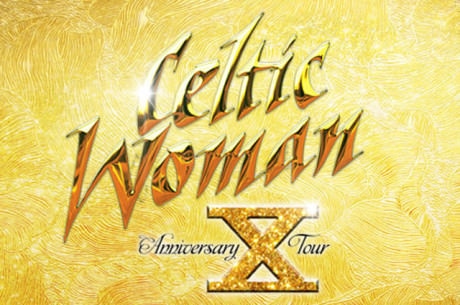 Celtic Woman played for one night only at the Filene Center at Wolf Trap-1645 Trap Road, in Vienna, VA. For future performances and Information: Call (877) 965-3872, or check their calendar of events.