It’s a rite of passage: dealing with all the stuff your parents leave behind when they die.

What do you keep, and what do you give away? How much do you fight with your siblings over that brooch that you thought was always meant to be yours? Do you take that big ugly armoire that your mother made you promise you’d keep even though it can’t possibly fit into your apartment?

Then there are all the documents. Do you read your parents’ letters? Their love letters? Their diaries? How much do you want to know about their lives?

When my mother died, I didn’t argue with my siblings and I did take the sideboard even though it didn’t really fit in our dining room. I also decided to read everything. It wasn’t just general curiosity. There were a number of mysteries in my mother’s life that I wanted to clear up.

My new one-man show, Stuff, is all about what we leave behind: the secrets and the lies, the treasures and the trash. It focuses on my mother, a woman who swallowed so much anger and ambition in order to lead a conventional suburban life that it fermented over the years before eventually erupting in her diaries and the short stories she began to write. These documents disclosed my mother’s shadow self as well as the secrets she spent a lifetime concealing.

Other characters who appear in Stuff include my aunt, a children’s book author, who watched a wrecking ball destroy all her worldly possessions. There’s also my old friend Geoff who vainly tries to reconstruct the railroad of his youth. And there’s my distant cousin Itzik, a famous Soviet poet who ran afoul of Stalin.

In the end, though, the play is all about stuff, the objects on which we lavish so much love and lucre. There are the things we collect, the things we hoard, and the things we crave because we believe them indispensible to our happiness. We all have secrets, and they’re usually tied up in our stuff.

Directed by Natalia Gleason, Stuff will debut in the Capital Fringe Festival in July 2015; running time is 90 minutes. It will appear at the Eastman Studio Theatre at Gallaudet University- 800 Florida Avenue, NE, in Washington, DC.  It will be accessible to Deaf audiences. 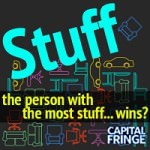 Stuff will also appear in September in the United Solo festival in New York.

Stuff is my seventh Fringe production in seven years. My previous shows were Krapp’s Last Power Point, Edible Rex, The Bird, The Pundit, The Politician, and Interrogation. My most recent play, Before/After, debuted in May 2015 in the European Month of Culture sponsored in DC by the European Union.

Last year, DCMetroTheaterArts lauded Interrogation as “a deftly told dark comedy about a serious and timely subject that immerses the audience completely in its creative story.” The previous year, DC Broadway World praised The Politician as “a brilliant mix of theater and politics.” The Washington Post said that The Pundit “deflates its target with a sharp satiric pin,” DC Theatre Scene called The Bird “a treasure,” and the Washington City Paper wrote that “Feffer is a brilliant writer and performer” in its review of Edible Rex. 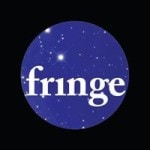 For information and to purchase tickets, go to Stuff’s show page on the Capital Fringe website.