When I was 6 years old, the girl down the street told me about God, and how He created everything. 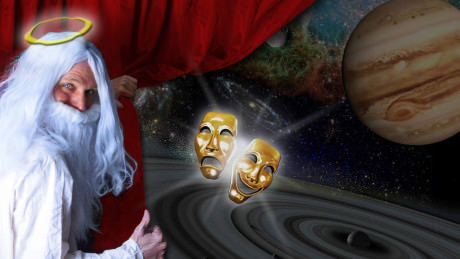 I have long been fascinated with beliefs, having spent many Sunday mornings of my childhood, alone as all my friends were in church. The bits and pieces I gleaned never seemed to make sense, even dropping into a Bible study session here and there as a young adult… I certainly wished I could believe in a higher power, but sadly, it just never resonated.

Years later, after touring for 3 years with Ringling Bros. and Barnum & Bailey Circus as a clown, I found myself traveling around Southeast Asia, performing comedy on the streets and dabbling in Buddhism and Hinduism, seeking “Enlightenment.” Boy, was I an idiot! Fortunately, admitting one’s own idiocy is the first step of the path! Still, my fascination endures with the variety of beliefs, with everyone certain theirs is the right path.

Back to God though…I’ve questioned, researched, googled, debated, meditated, and burned offerings, and the best answer I’ve ever got for “Who created God?” is: “God always was.” Only slightly better than Redneck Sam’s beery proclamation.

In the Bible, God was here before anything was here. So what was he doing before that? There was nothing around. Nothing to do. Nothing to see, hear, taste, smell or feel. Not one atom.

Since the Bible doesn’t cover His life before us, I have humbly attempted to fill in some of the blanks.

In 1993, after a street show in Bonn, Germany, an old woman reprimanded me. During the show, someone behind me in my circular crowd had helpfully thrown a cigarette lighter over my shoulder, so I could light a juggling torch. I dropped to my knees, indicating I believed the lighter had come from Heaven. I looked again at the lighter, then again at the sky. “God?” I asked, “You have a factory in China?!” The old German woman told me I should not joke about God.

I said, “I believe if God made us in His image, and we have a sense of humor, and we can laugh at ourselves, then God also must be able to.”

This is the spirit in which I bring God: The One-Man Show to the stage

My aim is to provide a light-hearted “Prequel” to The Bible which can be enjoyed by people with a sense of humor, whether believers or non-believers.

I hope that rumbling above is heavenly applause, not a thunderbolt. 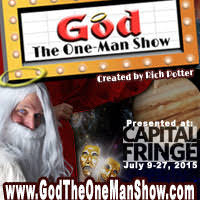