At the end of my play, It’s What We Do, Ilan, an Israeli Defense Forces soldier, says:

“I’m standing guard at a post, aiming my weapon at everyone.  You know what image comes to mind for a Jewish soldier pointing a gun at a bunch of citizens?” Ilan, a soldier with a philosophical bent, feels intensely the ironies of history: how could he, as a Jew, terrorize another group of people because of who they are?

This play is full of confrontations between Israeli soldiers and the Palestinians they are trying to control—encounters that distort the lives of both. The young men and women conscripted into the Israeli military at the age of 18 believe they are defending their country. Those who serve in the Occupied Palestinian Territories discover a much darker reality. Their role is to intimidate, control and pacify an entire group of people who had the misfortune of living where the Israelis want to be. If the soldiers make it bad enough, maybe the Palestinians will just leave. Disrupt their movements with more than 60 checkpoints and roadblocks; harass them with unwarranted house searches; demolish their homes on various pretexts; allow Israeli settlers to attack Arabs without restraining them. There are the policies of Occupation the Israeli government implements through the young soldiers in the IDF.

How do these soldiers respond? Some of them get high on their unwarranted power. Many are troubled by their own actions; or torn between wanting to be a good soldier and realizing the devastation they are visiting on innocent civilians. Those who are not willing to be silent about what they have done and seen may eventually give testimony to Breaking the Silence, an Israeli organization whose goal is to break the collective Israeli silence about the Occupation and its realities.

It’s What We Do is based on the book Our Harsh Logic: Israeli Soldiers’ Testimonies from the Occupied Territories, 2000-2012, compiled by Breaking the Silence. The play was born at a Busboys and Poets in the fall of 2013. Former IDF soldier Avner Gvaryahu was speaking about the book and his experience as an IDF soldier. I was inspired by his courage in speaking out about the realities of the Israeli occupation. Being a theatre person, I immediately imagined a theatrical production that might bring these soldiers’ testimonies to a wider audience.

The play is drawn directly from the testimonies in the book: all the soldiers’ reflections are verbatim; the enacted stories are ones they tell. Come listen to what they have to say—and honor the lives of the Palestinians who suffer under Occupation and the Israeli soldiers who expose it. 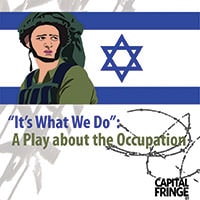