Most women have a strong desire to be free, fully self-expressed, and share their vision with the world. AND most women also have this overwhelming urge to be perfect, like PERFECT, in every way. Quite the predicament.

This solo play explores how those two facets of being a woman simply cannot exist in the same space. Incorporating monologue, song, poetry and movement, this high energy, fast paced, fun and inspiring show tells the story of seven women stripping away (sometimes literally!) the layers that have been hiding who they really are.

From Seven Layers to a Bikini Top in Less Than Five Hours
Written & Performed by Andrea Schell
Directed by Wade Gasque
www.sevenlayersplay.com 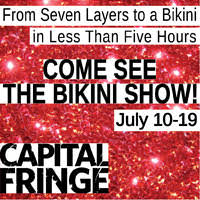 PURCHASE TICKETS BY CALLING (866) 811-4111, OR PURCHASE THEM ONLINE.
Andrea Schell is a Monologist, Solo Performer, and Workshop Leader living in Santa Monica, CA. Her mission is to make people light up, feel alive, experience their ownvgreatness and laugh.

She is an active member of the storytelling scene in Los Angeles and has told original works at The Moth, WriteClub (2x champion), Tattle Tales, The Trunk Show, and others. She has also told stories and is often brought in as a guest host for the story event, Shine.

She created the original series What Would Men Say?, currently streaming on EvoxvTelevision and was Associate Producer for the award-winning indie feature, Tiger Orange, and the feature documentary, Discretion & Faith.

From 2007-2011, she was assistant to producer Bonnie Pietila on The Simpsons.

She is currently in development of her next solo show, An Extremely Ordinary Girl, which she has been developing through workshops with Lauren Weedman.

She has performed her solo show, From Seven Layers to a Bikini Top in Less Than Five Hours, in Los Angeles, New York, Bali, and now DC.

Andrea has a BFA in Acting from Marymount Manhattan Theatre and has also studied at ACT, The Atlantic, OI West, and UCLA.