You know that show where the pretty blonde, with the revolving door of handsome suitors is constantly getting into trouble? You know how every episode ends with her on the couch, or at a bar receiving hilarious words of wisdom from her sassy-street-wise friend? This show about the friend, the actor playing the friend, and the folks watching. is a satirical one-woman show about image-addiction, and stuck narratives. The title is sure to cause more than a slight case of  “side-eye”, so before I catch too much shade, let me explain.

The title refers to two very separate narratives which minority actors have been granted by the entertainment industry. Currently, the trend on film and stage is to include diversity but only the historical kind. In the past 4 years The Help, The Butler, Dallas Buyers Club, and The Normal Heart all found wide acclaim amongst audiences, and rightfully so, as they were incredibly well made. Americans are really good at caring about minority narratives when we already know which historical side to be on. If you want mainstream success with a minority lead, the formula is simple: Off to the DeLorean!

Now I know you’re all saying, “Okay! Dee Dee, I totally get that but why put these two narratives together in a one-woman show?” Good question! My first answer is COME SEE THE SHOW!

My second answer is because something very weird is happening with the current roles for gay men and black women. We are starting to look a lot alike. We have become sassy best friends! Forget the past – most of these sassy “besties” don’t have one! The black/gay best friend has made it into current stories everywhere. We can be found in romantic comedies, coming of age dramas, and summer blockbusters, always as a sassy, wise, vessel of truth and humor. Every “Girl, please” and “No she did not” is delivered by a fiercely loyal creature with great hair. Honey, black women and gay men are currently sharing more than just a deep and unrelenting love for Tina Turner (sorry, stereotype!): we are nearly interchangeable in our modernity.

Where are all of the authentic narrative(s) of NOW for these communities? No AIDS, No Maids takes a look at the corrosive and repetitive positioning of black women and gay men as the sassy, selfless “best friend”, or the center of historical stories that have no room for the unanswered questions of a new generation. It begs the American Theatre to reconsider the authentic voice of “the other. In a world where we are becoming increasingly interested in what we are consuming, and what effect it may be having on our bodies, No AIDS, No Maids aims to start the “organic image” movement. I promise you, it will cost less than a trip to Whole Foods. 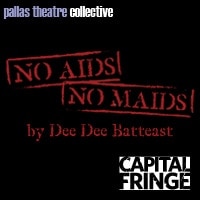