Death is inevitable for a young lost soul…

In its world premiere at the 2015 Capital Fringe Festival, I (Playwright and Director Veronique LaShell MacRae) explore the dark, grim, and often hushed subject of teenage and young adult suicide in my newest piece, The Suicide Journals.

A young man who struggles with his identity in a religious sect that coins homosexuality as sin; a young woman unwanted by a mother who wishes she had thrown her away, a promising scholar who is challenged by the systematic injustices of American society, a girl who’s Islamic faith unwillingly invites bullying and ostracism; a woman who learned at an early age that her body was not her own. Through the lens of the Jumper, the Hanger, the Shooter, the Pill Popper, and the Cutter, The Suicide Journals takes an in-depth exploration at the challenges faced by youth that often lead to the decision of attempted or “successful” suicide. It rips away the mask that often covers what is coined as taboo in order to share the story of youth that have succumb to death by suicide in hopes that someone else’s story doesn’t end the same way.

Through a blend of monologues and video, I aim to create an intense educational and informative performance that evokes change and advocates for an increased awareness on suicide prevention.

As I enter into my tenth year as the Founder and Executive/Artistic Director of Act Trinity Creative Arts Services, I continue to press forward with the mantra coined by 20th century poet, playwright, and theatre director, Bertolt Brecht:

Art is not a mirror held up to reality, but a hammer with which to shape it. She desires “to dismantle the stereotypes, injustices and misconceptions of the world in order for all to live into the fullness of their humanity without hindrance through the power of the arts. 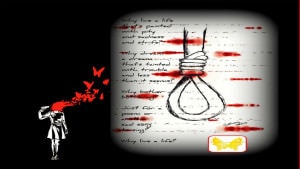