Imagine one of Shakespeare’s dodgiest characters, John Falstaff, as a political advisor in modern day DC. Fired by the President he runs a K Street lobbying firm that employs Macbeth, Ophelia, and Polonius as advisors. Together, they manage the reelection campaign of Senator Titus Andronicus who is running a tight race against young, charismatic war veteran Coriolanus. Former Falstaff acolyte turned nemesis Kate “The Shrew” Minola manages Coriolanus’s campaign. 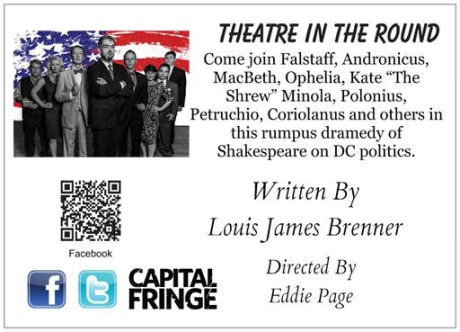 Why did I write To Err is Falstaff!! BTW, the two exclamation marks are intentional. Falstaff is such an egoist that one exclamation doesn’t do him justice. It started last October. Michael Hutchins (who portrays Macbeth) and I contemplated doing something for Fringe. Having no theatrical experience I thought the notion absurd. However, when you don’t own a television you need something to occupy your mind so why not?

I wanted to write something that Washingtonians can identify with, but, what? Politics! In a city that thrives on spin doctoring, sound bites, polling, talking heads and other forms of medieval torture politics is a gladiatorial sport without sandals. I’ve dealt with the political class in this city and have many stories about their egos and absurdities and so had ample fodder. Bismarck (not to be confused with Biz Markie one of my favorite rappers from the 90s) once wrote “Laws are like sausages, it is better not to see them being made.” The absurd nature of politics lends itself easily to farce.

That was half the solution. What was the other half? What else resonates with Washingtonians? William Shakespeare was the answer. “I’ve always had a deep and abiding respect for the immortal bard. He is the most human of all writers,” booms Falstaff. It is true. His writings show what people are about—the good, the bad, and the ugly. Shakespeare, like many of his characters, was a bit of a vagabond in his youth. He left home to make a living as a playwright. You don’t make a lot of money unless you have a shtick. So, he wrote about what people liked: sex, violence, family squabbles, treachery, and life’s dark underbelly. Some things never change. Indeed, Shakespeare was Quentin Tarantino before Quentin Tarantino was Quentin Tarantino.

I set about writing. Falstaff as a political operative was easy; he performed a similar function for Prince Hal. After being fired by the President Falstaff sets up Measure for Measure to shill to “Presidents, Kings and anyone who will pay my exceedingly high hourly rate.” He hires Macbeth, Polonius, and Ophelia as advisors. These three characters, like Falstaff and the other characters, are not genetic duplicates of their Shakespearean counterparts. Their personalities and situations in this play are contemporary and Washington-centric (Ophelia laments “Couples don’t break up anymore. One person acts like an ass until the other person can’t take it anymore!). Changes were made. Apologies to the purists!

Falstaff is managing the re-election campaign of three-term Senator Titus Andronicus. Andronicus is running a tight race against his challenger a young, charismatic war veteran named Coriolanus. Andronicus should be winning but isn’t. Falstaff and his merry band are working to improve the Senator’s poll standings with unintended results.

Coriolanus is doing well thanks to the political machinations of Kate “The Shrew” Minola. The Shrew (Falstaff’s nickname for her along with “bunny bumper bottom.”) was once Falstaff’s number two. Now, they are hardened adversaries each taking delight at skewering the other. Sounds like typical Washington office politics right?

There is much subtext and undercurrent in the play. In the dialogue and the actions. If you blink, you’ll miss something. This I promise.

I’d like to thank the cast and crew. They brought my vanity project to light in  a fashion that is better than I intended. A special thanks to our valiant Director Eddie Page – The true linchpin of all things Falstaff. 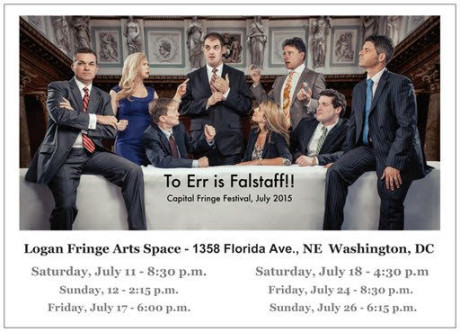 If all this interests you, check out Falstaff  on our facebook page.

And, remember all the world’s a stage!!