The Little Crane and The Long Journey: A Fable is the all-too-common story of an immigrant family dealing with prejudice in the United States. The story is a representation of the struggles Japanese families faced in the American West and the similar struggle that the children of Japanese immigrants faced when trying to serve in the army during World War II. Fortunately, this production turns it into a simple, easy to understand fable in which cranes represent the immigrants, ducks represent the Americans, and a stream is their shared world. 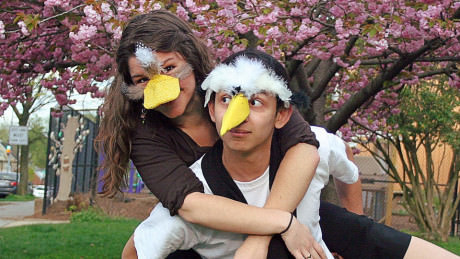 Director Hope Villanueva created a production that is fun for the whole family. It is easy to understand, visually stimulating and wonderfully interactive – at one point I was on stage helping to arm a soldier.

The story is narrated by a puppet turtle played by puppeteer Phillip Reid. His enthusiastic narration sets the tone for this adventure.

The ducks, which doubled as the unaccepting, gossipy neighbors and the mean, bullying kids, were played by Ruthie Rado, Andrew Quilpa, and Stephanie Tomiko. They were all exuberantly entertaining and passionate, perfectly meshing close-minded mannerisms with mallard mannerisms.

The crane parents, Rebecca Speas, and Mathew Strote were also great. Speas, in particular, excellently portrayed the pain and confusion of a concerned mother and unappreciated immigrant.

Bryan Azucena played Yori, the crane child who joins the army to defeat the invading fox. He was fantastic in this lead role and, especially towards the beginning of his performance, his great job was highlighted by his hilariously accurate long-legged walking style which mirrored that of a crane. I do wish he had kept the extravagance of the walk throughout the production – it was brilliant.

Movement Director Tyler Herman did a fantastic job The quirks and eccentricities of the ducks and cranes seemed physically representative of the animals but to an extreme which made it funny. Additionally, the final fight scene between the terrifying, larger-than-life fox and the ducks and crane was exciting and dramatic, though lighthearted.

The stage, with the wonderful statue of two cranes – part of the Japanese American memorial – in the backdrop was empty which allowed for free movement and a play that utilizes creativity excellently. Tomiko, one of the ducks, played a house for a short part of the play. That being said, the memorial doesn’t have seats so be prepared to sit on the ground. This allowed the actors to come in and out of the crowd, interacting with them, and though I was initially apprehensive, it worked very well.

The Little Crane and The Long Journey is fun for the whole family and explores a theme which is easy to understand but, time and time again, has proved hard to live up to: acceptance. This production represents a fun, interactive and creative way of emphasizing acceptance rhetoric. Bring your kids, bring your grandparents, because this production is entertaining and important for everyone!

The Little Crane and The Long Journey: A Fable plays through Saturday, July 25, 2015 at the Japanese American Memorial – at the intersection of New Jersey Avenue and Louisiana Avenue, in Washington, DC. For performance times and to purchase tickets, visit their Capital Fringe Page.