There was never a dull moment in Twelfth Night: A Musical Remix directed by Justin Poole. This version of William Shakespeare’s well-known comedy, filled with confused identity, trickery and drunkards, took a usually three hour production and condensed it into the space of about 70 minutes. It was fabulous. 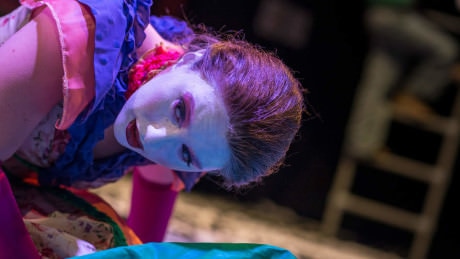 The plot is simple. Sebastian and Viola, twins, are separated and think each other dead. Viola disguises as a man, Cesario, to work for Duke Orsino who loves Olivia. Orsino sends Cesario to court Olivia on his behalf. Cesario, who is actually Viola, falls in love with Orsino. Olivia falls in love with Cesario. Sir Andrew also wants Olivia. Through a mean practical joke, Malvolio, Olivia’s butler thinks Olivia is in love with him. Sebastian shows up and chaos ensues. Confused? So are the characters.

Poole aimed for the hilariously ridiculous in his adaptation and was wildly successful. Every scene was over-the-top, boisterous, loud, flashy, fun and fast-paced. In fact, the pace was so fast that, unless you are already familiar with the play, it could be hard to follow at times, so brush up on your Shakespeare before coming!

Of course, this kind of vision cannot be successful without actors and actresses willing to fully commit to the idea. The stunning cast of Twelfth Night: A Musical Remix did just that – and did it well.

The tone was partially set when they all came out with their faces, for some reason, painted white. Furthermore, Costume Designers Holly Labbe and Ama Ansah created awesome, easy to change, costumes that were even somewhat indicative of the time in which the play takes place.

Sean Byrne, who played Duke Orsino and Sir Toby Belch, was exquisite. He was wonderful at both being the melancholy, entitled Duke, who lounged about atop his groaning servants and the crazed, party-animal that is Sir Toby Belch, stumbling about and laughing uncontrollably. His singing voice is also dominant and he has great range. Byrne is able to explode in commanding singing all while keeping his rambunctious acting at 100%. It is a great performance.

Shannon Dove, who played Sir Andrew, the Captain, and Valentine, was awesome by Byrne’s side. Together, they created an atmosphere that actually felt like an insanely fun, drunken party. They were glamorous as they drunkenly rampaged about the stage.

Makayla Baker also played alongside Byrne as Maria, the housemaid with whom Sir Toby constantly flirts and as Viola, who pretends to be a man named Cesario and works for Duke Orsino before falling in love with him. Baker is also excellent. She is hilarious like the rest of them but also successfully portrays the seriousness and worry that comes with the complicated situation she’s in. Baker is particularly adept at showing her distress. She also sings! And well too, though I do wish her voice were louder as it was sometimes drowned out by the street noise and sirens of this always-lively section of DC.

Garrett Schwalbach plays Sebastian, the thought-to-be-dead brother of Viola, and Malvolio, the pretentious, sycophantic butler of Olivia. As the butler, he is fantastic. He yells at the drunken Sir Toby with such epic disdain. He talks to Olivia, his master, with such revolting falsity. And when he is tricked to think she is in love with her, he delivers the most hilarious, writhing insanity that you could dream of.

Clara Bush plays Olivia, the lady of the land, and Antonio, the man who saves Sebastian from drowning. In constantly switching from a stately lady and a noble man, Bush had a difficult job. She handled it well. Like Baker, her roles weren’t just ridiculous fun but she had to deal with more complex emotions as well. Bush as the betrayed Antonio is the perfect mix of angry and shaming. Bush as the noble Olivia is the perfect mix of stiffness and impassioned love. In a myriad of great singing performances, Bush’s voice is stellar.

Holly Hanks plays Feste the fool. In typical Shakespeare, the fool is the smartest person on the stage and has everything figured out long before. Hanks showcased the snide required of such a role. She was also riotously funny, and had a great singing voice.

Jim Clemens and Jacinda Stahly played piano and violin respectively. The music was so dynamic and exhilarating that it almost seemed like its own character. It set the tone of the play from the very beginning as fast-paced, lighthearted, and painfully fun. Both musicians were exceptional.

Twelfth Night: A Musical Remix is so much fun. Don’t be surprised if you find an actor sitting on your lap or hiding behind you in the audience, these guys are everywhere. It is 70 minutes of non-stop action and if you like the over-the-top, the crazy, the loud, the fast, the ridiculous, and people writhing on the floor, you’ll love this musical.