A critic is not supposed to be part of the show.

A critic is not supposed to get up on the stage and “get down,” wiggling her fat belly/butt under the bright lights.

But BellyFunkShun calls for it. “Chief Creative Mind” Shadiyah asked for it. And nearly the entire scant (not entirely skanky) audience at the Fringe debut performance Thursday in the end joined in the jiggy fest. 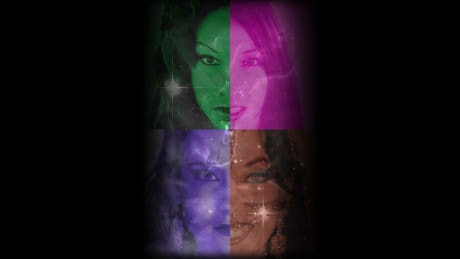 Don’t be shy now. If you’re intrigued by a show that advertises “adults only” and features scantily clad, scarily talented exotic belly dancers, funkdelicious hits from the ’70s and psychotropic projections, come gratify yourself. This is what Fringe is about: exploratory artists and adventurous audiences.

Come explore a galaxy far, far away from Fringe headquarters, the Brookland Artspace Lofts Studio venue, just steps from the Brookland CUA Metro station, which is a trip in itself — a burgeoning hipster ‘hood with brew pubs and a budding arts scene.

There you’ll find The Vanguard Sisters, who “escaped their cryogenic imprisonment at Area 51” and returned to D.C., only to discover the first black U.S. president (progress) but a seriously sorry funk deficit. They pick up their mission “so rudely interrupted in July 1952” – when, borrowing the power of the Egyptian pyramids, they infected Charles Connor – the originator of the “a-wop bop-a loo-mop, a-lop bam-boom” riff — with funk, who begat Little Richard’s funk, then James Brown’s funk …

Yes, the plot is wildly thin, and it’s all projected pre-show on the ceiling planetarium-style in a wiener-style font that is hard to read. But once the music starts – Stevie Wonder, Rick James, The Commodores, Brothers Johnson, Wild Cherry, Chuck Brown and the Soul Searchers, Kool & the Gang and oodles more — you’ll feel you’ve entered a house party or possibly a strip club. The deejay is DOPE. And the costumes are out of this world.

Gorgeous Asala and Wuiping, part Bond girls, part strippers, perform contortions in silver gossamer wings. Asala especially dazzles, commanding her internal organs to perfom an erotic organ recital, limberly doing the limbo while balancing a cane on her head. Wuiping moves from Bollywood to Latin ballroom to Flashdance so sensuously. Shadiyah does a great Shakira impression in a space-age can-can costume with touches of Victorian spatz. Her joy is simply infectious. The costumes are jaw-dropping, and they tend to drop away as each number progresses. Lots of wind-chime bras and tinkling belts, sultry scarves and bedazzler arts-and-crafts projects. You might wish you brought some dollar bills to stick in crevices, except these ladies are so classy, you feel embarrassed for even thinking that way

The opening numbers are well-choreographed, but after 20 minutes they devolve into claps and arm waves and winks until everyone gets quite cozy with one another. Still, they will melt your inhibitions and force you to dance. For what is art if not participatory? Their funk fusion will chase any funk you came in with.

Bonus: They promise each of their remaining five shows to be a different mix of talent and guest performers. And the A/C is super funkshunal!

Feel like bustin’ loose? These ladies will force audience members, passively sitting and waiting to be entertained, to move from voyeurs to voyagers. Heyyyy soul makoosa… leave your coma coma coma coma behind and get your back up off the wall.

Running Time: Precisely one hour, with no intermission.