IMPROV WARS is exactly what it sounds like. Ok – maybe it’s not exactly what it sounds like. No one is improvising a war onstage. Nor are any improvisers actually fighting to the death. However, Laugh index theatre brings two different troupes to the stage each performance during this Capital Fringe who will duke-it-out in a 25 minute long form session. Your votes will decide who moves on to the final IMPROV WARS show on July 22. There, the two top teams battle to be crowned the IMPROV WARS champion. 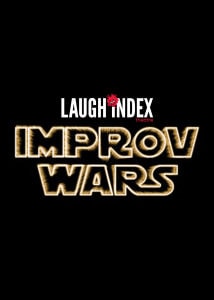 The format is simple – our host, Michael Bales, tells us what group will be performing first, and what the theme for the evening is. Tonight is “Town Crier Night,” celebrating the upcoming holiday, “Town Crier Day.” 25 minutes are on the clock, and tonight’s first troupe takes the stage.

The Lodge, a group of young men in their mid-20’s, rush on. Michael tells us that 3 bonus points will be awarded if our first troupe can successfully enter a scene and call out “Here Ye, Here Ye,” and subsequently deliver news. He also explains that he will award three bonus points if, in the final minute of the 25 minute long form session, a town crier can recount all the happenings of their performance. Bonus points will also be awarded whenever Michael deems necessary.

The Lodge turn out to be fundamentally excellent, producing a funny and cohesive long-form session that includes frat-boy rats, underfunded and very dangerous Russian day cares, and a “Dinner Blitzkrieg.” Each performer contributes equally; the comedy is smart, and most often unexpected. While they lose bonus points for “gratuitous underage cleavage,” they gain bonus points for both town crier categories, and their creative Rat Black Swan Ballet.

Asian Moms are up next. Our host explains the same rules to them, but they take a different approach to their 25 minute slot. They begin with a story from an audience member about her mother, as their troupe’s comedy is often “inspired by their own Asian moms.” They take bits and pieces from the audience member’s story, whose mother has an affinity for dry red wine mixed with sprite (“A spritzer!”).

Frequently, scene partners are fighting each other for routes to go within a scene and are talking over each other. There are some brilliant one-liners, to be sure, and an excellent few scenes about racist eating habits (brought on by a troupe member’s story about her father’s belief that clear sodas are better for the body). They gain only one bonus point for the town crier summation category, but they gain all points for the “Here Ye” category. With few other “elective” bonus points given, The Lodge seemingly has the advantage.

Now the audience votes on a small paper ballot, handed to them when they entered the venue. In the mean time, we have a third troupe, not competing, who come on to play Improv games while the votes are tallied. Unexpectedly, Porkchop Volcano, out of Arlington, VA, are the highlight of the evening. My head still hurt when I got home later in the evening because I had been laughing so hard. With clearly defined characters and an uncanny chemistry within the group, Porkchop Volcano are a force to be reckoned with. When news soon comes that the votes for the evening’s competition have been tallied, there is a unified disappointment that these four comedians have to leave the stage.

After bonus points and audience votes are counted (all count for one point), Asian Moms take the evening, by a single point! Asian Moms will be back on Sunday, July 12th, and possibly on Wednesday, July 22th, for the final show.