This is not the Neverland you remember. It’s grown-up, it’s grittier, nothing is certain; and with straight on til moUrning, local physical theatre company relEASE has presented a daring and fresh new take on the story of Peter Pan. 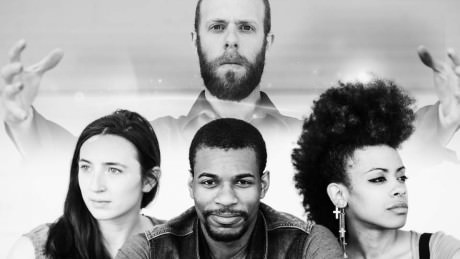 I should first point out that I LOVE Peter Pan – there are myriad adaptations of it, and I was pleased to find that, though this is a contemporary update, the plot of the original children’s story is almost completely intact. There are lost kids, Pan, pirates, and adventure – though not the kind you might expect.

As in the original, straight on til moUrning’s Wendy, played charmingly by Anna Lynch, meets Pan (just “Pan” here, not Peter, and played by a powerful Justin Bell) after waking up in the middle of the night to find him stalking around in her room – but it’s a room in her current foster home, and she’s being moved again in the morning. He steals away with her to Neverland and invites her into his gang of Lost Ones, a band of youths always trying to stay one step ahead of the pirates, led by Captain Hook (Ryan Tumulty). There are some lovely dance interludes, as well as a touching scene with the whole gang at dinner, where it becomes clear how much they all mean to each other, and how much of an outsider Wendy is, alone again in a strange new place.

It is very much an ensemble show, and a strong one, though there are some standout performances from the leads, particularly Justin Bell and Sharisse Taylor, who plays Tink. No dainty fairy, this – this Tink has seen things. She knows her own power, she holds nothing back, and she can more than hold her own against Pan. Pasquale Guiducci (Croc/Squirrel), Emily Berry (Willow), and Taylor Robinson (Lyric) are all funny and touching as the Lost Ones, and Jon Jon Johnson as Smee is an excellent partner to Tumulty’s frightening Hook, lurking everywhere.

Wendy’s shuffling through foster homes is really only a sidenote, however, as the real push comes from the parallels with recent events in Baltimore and Charleston. Pan, Tink, and the Lost Ones are all those who live on the sidelines, while Hook and the pirates are the law. You’ll find all sorts of parellels here. There are a lot of powerful moments crammed in to only 65 minutes, and there’s no shortage of action.

This company is lucky to be in the great new space they’re in – Logan Fringe Upstairs is completely round, adding depth to Tori Bertocci and Pasquale Guiducci’s already excellent staging. They clearly took advantage of it with the choreography; Jessica Thorne’s sound design was also lovely and a couple of very pretty musical sequences had me wondering if any of it was borrowed from the Broadway musical. The set is minimal – typical for fringe, but well-utilized, especially for the big movement sections.

All these aspects serve the show well – but the script needs to make the story feel more complete. Still, straight on til mourning is a valiant effort with amazing intention and a ton of heart, and a beautifully crafted show with a huge amount of potential.