Alice was colorful, in every sense of the word. And that was good. Adapted from Lewis Carroll’s book, Alice in Wonderland, Alice, directed by Haley Murphy was an explosive version of the story we all know. Alice, a girl, falls into a hole and finds herself in Wonderland where she encounters rival queens, timid rodents, a crazy hat maker, and much more of the impossible. 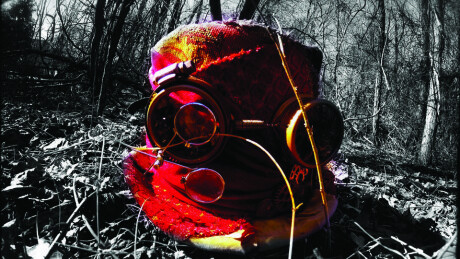 This version fit right in with the Fringe festival’s quirky character. Everything about it was beautifully eccentric. Even the stage! Upstairs at the Fringe is a circular stage with seats all around. This makes it hard for actors to exist on stage without having their backs turned towards some members of the audience. The cast of Alice handled this well. The players were constantly in motion so that I never had to stare at the back of anybody’s head for long. Even when I did, their rich and powerful voices were such that I didn’t feel like I missed anything.

The costumes, designed by Cynthia Adler, were flamboyant, vibrant and showy. They included some fancy hats, bright velvet wear, nifty corsets some goggles, and much more! If Wonderland is a dream world of the impossible, the costumes were perfect for the place. And the actors that filled these costumes lived up to their fantastic vestments.

There was a cast of six actors and actresses in a show of 13 characters. Each character was as unique and outlandish as the next.

The two men, Dino Coppa and Nick Martin played six part combined. Their funniest moment – of many, many funny moments – came when they acted as Tweedledee and Tweedledum. They awkwardly and timidly shuffled across the stage in unison displaying a bizarre and peculiar blend of twitchiness and goofiness. The two also played mirror roles as the White Knight and the Red Knight. As chess pieces, they moved across the stage rigidly and precisely all while maintaining that eccentricity that defined the show in such a fun way. Martin also excelled as the Cheshire Cat as he prowled around the stage in the pouting, purring way of a feline with the added sass and whit necessary to be from Wonderland.

Sarah Cusenza played the over-anxious White Rabbit and the Caterpillar. Cusenza played two very different roles with immense talent. As the Caterpillar she was pretentious and condescending. Her disdainful frown was spot-on and seemed permanently implanted on her face. As the White Rabbit, she was erratic and obsessively anxious, uncomfortable and offbeat, weird and wonderful. She was so fun to watch.

Lily Kerrigan played Alice. Kerrigan was perfect as the naïve and confused Alice, always baffled by what she is experiencing in Wonderland. She exposed the purity and open-mindedness one would need to take that crazy series of events in stride as she did. That said, Kerrigan was also able to show her forceful side as she commandingly asserted herself as a queen towards the end of the production.

The Red Queen was played by Sally Cusenza. Her performance was a highlight of the show. She had a great way of being fanatically in power and commanding while also being nutty and insane.

Her counterpart, the White Queen, was played by Amanda Quain who also played the Dormouse. Quain was fantastic, particularly as the dormouse. During Tea Time, the actors and actresses broke into a kooky dance in which they would rhythmically move as one and then freeze. Quain’s mannerisms and freeze-faces were hilarious.

This wasn’t the only dance. Many times throughout the production, the cast broke out into these mysterious, odd dances. They added a great aura of curious mystery to the production. I do wish that they had been better synchronized as this could have heightened that mystery immensely.

Rumor has it that Lewis Carrol wrote the book Alice In Wonderland about a girl under the influence of drugs. Alice would serve to help confirm that rumor. It is bizarre and funny, whimsical and weird, and full of the unexpected. You should definitely see this one. And don’t forget the wise words of the Red Queen: “don’t be LATE.”