From The Breakfast Club and Mean Girls to High School Musical and Glee, high school stereotypes have been the popular subject of numerous writers. But often this exploration is missing a very important element: input from actual high schoolers. Hannah Harmison and The Millennial Theatre Company is seeking to change this with their passionate new show, Breaking Character. 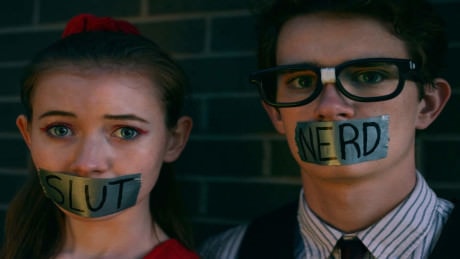 A motley group of teenagers take on roles like Jock, Band Kid, Quirky Best Friend and The One Black Kid to tell the story of a class of one dimensional stock characters who become suddenly self-aware when Nerd finds an old English textbook discussing character development. Attempting to stop them from developing into three dimensional characters is Mrs. Authority (Gale Nemec), who staunchly declares that there is no point in interrupting these teenagers’ education with silly things like personal growth.

Each of the characters must deal with the many facets of stepping out of their perceived role. Girl Next Door (Jessica Dallessandro) doesn’t want the pressure that comes with frequently being the protagonist in stories. The One Black Kid (Mackenzie Williams) is sick of keeping production studios from being sued. But not everyone is interested in pioneering a new path for themselves. Band Kid (Max Torti) doesn’t know what he would do without band practice, and Nerd (Joe Walker) can’t imagine not acing a test; being smart has always been his “thing.”

Harmison, a junior at Chantilly High School and the playwright and director of Breaking Character, should be commended for her thorough and thought-provoking script, which covers a huge variety of issues. The show is most compelling and original in the hints of an almost dystopian alternate reality where character development is forbidden (aptly highlighted by the class discussion of Ayn Rand’s Anthem). Though long, the show made good use of its actors, each one having a moment of revelation or a piece of sage advice. Its simple set of 10 school desks and plastic chairs worked well, along with Becca Gustafon’s costumes, which would easily be seen walking the halls of any current high school.

Breaking Character is more than another story about the jock who wants to sing. It is the Class of 2016’s plea to be allowed more agency over their lives. Adults may call teenagers angsty hormonal messes, and they may be right, but their messes are just a part of the process of growing up. And they want the chance to do that without the pressure of overbearing parents, college admissions committees, or catty peers. As Pointless Background Character asserts towards the end of the play, “It’s hard to figure out where you’re supposed to be, when you don’t even know who you are.” We owe it to them to listen.

Running Time: One hour and 45 minutes.