In DC Trash – Recycled!!, the charismatic Ron Litman, star of this two man show, delivers a stirring commentary on the changes this city has gone through since his upbringing as the son of Deli owners in the city to his life now as a garbage collector in the City.

Litman is like your crazy uncle or grandfather at the family reunion: he is filled with great stories, amazing historical knowledge, and a perfect blend of eccentricity and hilarity. 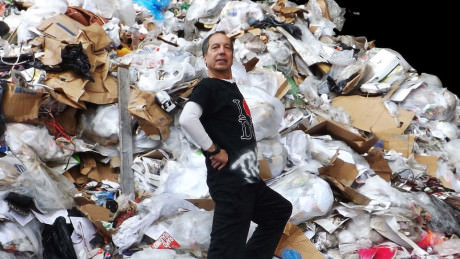 The stage was setup when I sat down. There was just a pile of garbage center stage and Tom Pile, the show’s musician was set up to the side. When it started, Litman emerged from beneath the pile of trash! He’d been there as the audience was settling.

This was not the only example of how committed Litman was to the show. He also spent a small amount of stage time only in underwear as he pretended to be our lord and savior, Jesus Christ.

Litman’s commentary encompassed a breadth of important topics. At the forefront were race relations which are of particular importance to him as a white man in a profession he claims is dominated by African Americans and Latinos. Also covered was the mechanics of trash collection and Litman is informative and creative in how he makes this seemingly dull topic, great to listen to and follow.

Litman’s stories are compelling. They range from the emotional tales of his now-deceased mentor to musings from his experiences working in his parent’s deli. He is entertaining, charismatic, and fun to watch and manages to keep the play lively and exciting almost completely by himself.

He was aided by Tom Pile, the musician. Pile stayed to the side and played the piano along with doing the sound from his computer. He was excellent with the piano, displaying the upbeat performing jazz style that was once a staple of this city.

Apart from spoken commentary, Litman, with the backup of Pile, regularly broke into song. He even can play the harmonica. Though his voice isn’t fantastic, he makes his musical performances amazing through his charisma and commitment. He really did a stellar job.

The play is also informative. Having lived in the City periodically since the 1950s, Litman is witness to much of its history. Consequently his commentary on its changes is brilliant and relateable without being preachy. It is comedy perfected.

DC Trash – Recycled!! is a hilarious, lively commentary on this city. Litman isn’t shy about the way he speaks which gives the show a great feeling of honesty, and rawness. That said, if you consider yourself a member of the political-correct police, you might want to skip this one. Of course, then you’d be missing out on a unique, fun and fascinating perspective from a DC native. See Litman’s and Pile’s show! You’ll learn something and laugh. What more could you want?