HalfMad Theatre delivered an evening of love, heartbreak, mortality, and struggle deep in the belly of W.S. Jenks & Son hardware store. The three performers entered the stage and engaged the audience immediately. I felt acknowledged and invested in what was to come. The play opened with the performers dancing in unison accompanied by a solo flute, a movement version of the fairy tale overture. There were sections of moving in slow motion as if gliding through a stage of taffy to slow down time. Other sections used gesture like locking thumbs and wriggling fingers preparing me for this tale of metamorphosis and freedom. 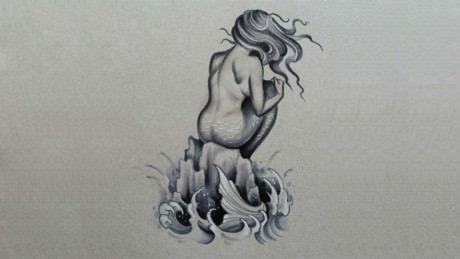 The adaptation of Hans Christian Anderson’s The Little Mermaid seemed to take place in the time of the original fairy tale without disrupting or commenting on the story. However, Director Carol Spring did take some liberties like foreshadowing and backtracking during the play leaving us to piece together the nonlinear narrative. We were transported back and forth to above ground and under the sea. The low ceiling of the venue enhanced the feeling of being under water during the mermaid scenes evoking a feeling of compression.

What sets this production apart is the blending of movement, theater, and puppets. It was a delight to follow these textured and bright beings as they floated across the stage. The performers showed a mastery of puppeteering, a clear result of rehearsing with the puppets and learning how they move and express emotion. Each puppet had her own movement vocabulary – the grandmother swam and hovered in a  relaxed, belly-out fashion, while the little mermaid expressed herself through fluttering her tail back and forth. The set and costumes seemed to be intentionally white and barren, making the intricately crafted puppets pop.

The performers effortlessly transitioned from scene to scene through the minimal set and repurposing of props. A blank projection flashed a couple of times during the play, but none of these images felt intentional, – a technical kink that will be worked out, I’m sure.

Audiences of all ages, summon your inner-mermaid, dip your toes in the ocean, and enjoy this fairy tale as it is brought to life.

Death and the Mermaid plays through July 26, 2015 at W.S. Jenks & Son- 910 Bladensburg Road NE, in Washington, DC. For information and to purchase tickets, visit the production’s Capital Fringe page.