“I have trouble distinguishing things that are real from things imagined.”

This is the reality we enter when we meet Lori, the “lone wolf” of the deeply moving Domestic Animals. Beautifully directed by Linda Lombardi with a talented cast of three and a smart, funny, poetic script by Jennifer Faletto, I found myself taken on a wonderful journey of love, entrapment, loss, and letting go. 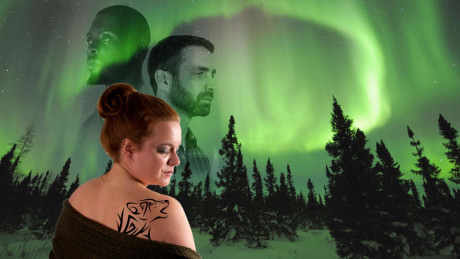 Set in 1970 Kansas during the Vietnam War, the play follows Lori (Christine Callsen) confined to a mental hospital in the aftermath of learning her partner Matt (Jeremy Hunter) is missing in combat. She’s a woman who’s lost a lot in a short amount of time, and she’s learning to cope alone. It’s beautiful symbolism: she’s like a wolf in a cage, strong and full of energy with nowhere to channel it; desperate to be free but with nowhere to go, and she knows she needs help. Callsen plays this heartbreakingly.

Equally moving are the performances of Andrew Keller, who transitions seamlessly from his role as Lori’s brother Lee into the role of Josh, her nurse, and Hunter, who also plays Lance. All 4 male characters, each in their own way, act as guides along Lori’s series of “reality checks”, and both actors move effortlessly through each role. It’s lovely to watch.

Although time passes within the storyline, all the action is continuous, and the scene changes were just as seamless and subtle as the performances. Christopher Annas-Lee’s set and lighting design are reminiscent of the wilderness at night, with stalks of wheat and dry grass ringing the edge of the stage, illuminated in green and blue. It’s very pretty and effective, like where a wolf would live. Candice Newton’s costumes and Jess Hoover’s sound design are also lovely.

Ultimately, the story shows, people are like a wolf pack: we have just as much potential to be dangerous if we can’t run free, and it’s against our nature to move alone. You can’t tame a wolf. But wolves are adaptable animals, like us, and sooner or later, whether real or imagined, we find that there’s always a glimmer of hope.