Playwright and director, Scott Courlander, places Witches after the events of his two former works, Medieval Story Land and The Ballad of the Red Knight, adding on to this fantasy saga. However, newcomers unfamiliar with the previous two installments need not fret. Courlander provides simple, adequate exposition for the current plotline which brings audience comprehension up to speed. Think Sleeping Beauty meets Hocus Pocus with plenty of narrative banter and powerhouse female performances. Surely, a concoction oozing with comedic and sensational potential. 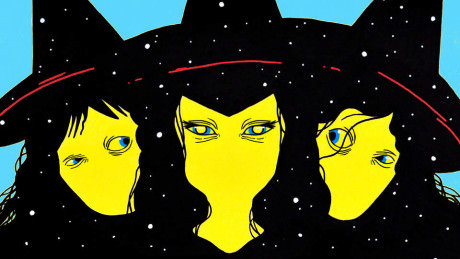 From the very beginning, the phenomenal cast of six dazzled in each role which clearly showcased the time and effort committed to this process. Stephen Mead as The Narrator/Jester starts the story off with engaging vocal inflection and tenacity. Mead’s training specialty in dramatic recitations certainly shows in the ease and freshness of his voice. Also carrying many pivotal narrative scenes is Kathryn Browning as Beatrice, one of three witches in the tale. Browning wields an excellent sense of wit and likeability that easily acclimates her self-narrating monologues to viewers in a comical way. Christopher Herring lends vital support as the Red Knight with scenes of entertaining camaraderie and convincing connections.

In true show business grace, Mary Agnes Shearon stepped in to replace an injured actress in the role of the somewhat dim-witted, but kind-hearted, riddle-obsessed Gragloria. Had the announcement not been inserted into the program, one would take a while to guess that the actress’  “Book of Riddles” is actually a script aiding in line memorization. Shearon’s natural and animated facial reactions tell the whole story as exceptionally as any well-rehearsed performer. Though the book only exists as a temporary crutch, Shearon integrates it as a memento-like addition to Gragloria’s characterization.

Completing the dynamic group of female leads are Renata Plecha as the powerful Mother of Mothers, Fanglina, and Katie Courlander as the young but noble Fanglett. The charming Courlander displays impressive physical prowess, flopping all over the space as a drowsy princess while exuding a youthful innocence. Courlander brings to life a compelling woman whose story is sure to resonate with many. Rocking some seriously high heels, Plecha delivers an elegant maternal figure that develops quite surprisingly with some crazy plot twists. Despite a few line slip-ups, the cast handled the fast pace and, at times, complexly-worded script commendably.

Courlander’s directorial attention to the physicality of adventure and presence remains evident in the actors’ well-timed movements and pantomime. Evidently, seasoned fight choreographer, Casey Kaleba, highlights and builds upon this healthy dose of combat and sorcery. An up close and personal start to the evening’s events quickly sucks theatergoers into the setting.

No stranger to the Fringe Stage, Red Knight Productions endlessly enchants us with inventive magic and humor. They say it’s cliché to end with a happily ever after, but Witches certainly closes the storybook on a successful journey into one of Fringe 2015’s must-see performances.