This appealing musical is an engaging discovery, performed by The Class Act Players, a theater company of seniors from Robinson Secondary School and Oakton High School in Fairfax.

Toby (Preston Kemp), a young farmer’s son trapped in the harsh conditions of the Dust Bowl, lives with his blind father Tobin (Alex Bulova) and his devoted mother, Anna.  Accompanied by the sharp-as-nails Paperboy Ralph (Rachel Ingle) he sets off for New York to find the now-successful businesswoman Gabriel Rosen (Sarah Marksteiner) an old friend of his father’s, in the hopes of saving the family farm.  Preston Kemp is a talented young actor and singer, with a natural charm, making his character Toby easy to like. As his father Tobin, Alex Bulova conveys a stoicism in the face of adversity which draws us to him.  Chloe Gilfoil (Tobin’s wife Anna), is a lovely actress and singer, who brings us a perceptive portrait of an anxious but determined wife and mother. Rachel Ingle’s Ralph is one of the highlights of the production. Her savvy, humor and audacity save Toby more than once, and she inhabits this entertaining“pants part” without a trace of self-consciousness. 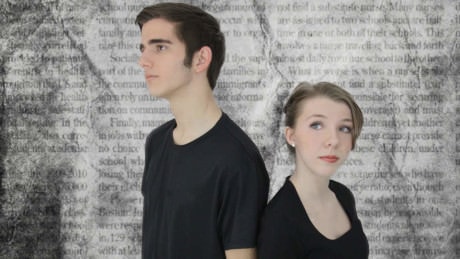 When Toby and Ralph get to New York, they meet not only Gabriel, but her daughter Scarlett (Andrea Matten) a successful jazz singer with a domineering agent, Damian Sharp (Rob Condas). Needless to say, romantic possibilities develop between Toby and Scarlett, which Damian, who is obsessed with Scarlett, does not appreciate at all. Andrea Matten’s Scarlett wants to perform her own material, and hesitates to sing the upbeat songs Damian prefers, in the face of her city’s economic woes.  Her Scarlett is beautiful and sensitive, and struggling with her own sense of isolation in the middle of wealth.  Her duet with Toby, “Take Me Now” is one of the most touching moments in the production.

Sarah Marksteiner is the writer and director, as well as turning in a moving performance as businesswoman Gabriel. She has written a psychologically astute story, about a woman who escapes a controlling man and finds true love. The poverty and suffering of the populace mirrors the myriad adversities of the Great Recession.  As director, she gives us a musical worth seeing. As Agent Damian, Rob Condas is appropriately passionate and suave, depending on the situation. His scene with Alex Bulova, as Scarlett’s latest fiancé, Ronald Murphy, is a high point for both actors.

The Ensemble, led by Brionna Simmons, carry off their multiple roles with elan. Simmon’s spectacular voice is especially noteworthy, but Kelly Thomas and Chris Mayhew (also, remarkably, cited as composer and musician) are equally fine.

The music is a joy to hear. The lyrics are simple and straightforward, and blend in seamlessly with the rest of the dialogue. The performers are particularly skilled at moving from their roles as musicians to acting in the production.

These seniors have been working together since November of 2014. It is a pleasure to see such talent and commitment. One word sums up this performance: enjoy!

(All Fringe performances at Gallaudet are ASL interpreted and/or captioned for the Deaf.)

Dust to Dust plays through Friday, July 24, 2015, at the Eastman Studio Theatre in the Elstad Annex of Gallaudet University – 800 Florida Avenue. NE, in Washington, DC. For schedule of performances and to purchase tickets, go to their Capital Fringe page.