Lights up and fog rolls over the stage. Television screens project images of stars glittering in the night sky. Three silhouettes appear in the eerie lighting and female voices begin to intone a chant.

This is the beautiful opening stage picture of Danny Baird’s new musical Girl Versus Corinth. 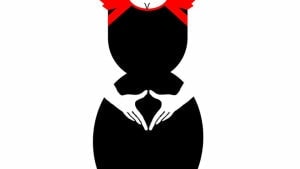 Breaking the solemn mood, Medea (Sarah Anne Sillers) bursts out. The lights begin to flash, the televisions go blank, electronic music blasts, the three silhouetted woman transform into backup singers. Medea begins to wail to the electronic beat. A camera girl (Tess Owen) runs onstage and begins filming the action, which appears live on the five television screens.  The audience is suddenly in an electronic concert.

No time to get too comfortable though, the music stops and suddenly Medea, a modern day millennial in this production, loses her rock star vibe and begins a lecture of sorts on feminist history. She also wants to tell us the plot of the classic Greek Medea. As the show progresses the three backup dancers, who are introduced as the Furies from Greek mythology, transform into the leaders of each feminist wave –  Mary Wollstonecraft (Catherine Purcell), Betty Friedan (Sherry Berg), and Rebecca Walker (Tatiana Wechsler) – and never return to their former fury selves.  In a gimmicky recurring bit, Medea forces the “stage manager” Stephen (Stephen Russell Murray), out on stage to fill in for all the male roles.

This show is truly having an identity crisis. Is it an electronic concert? A lecture on the history of feminism? A modern retelling of Medea?  A nod to millennial life?  A metatheatrical experience? There are so many elements of this production that stand strong on their own but they do not quite mesh.

An ambitious undertaking by Danny Baird, the composer, writer, and lyricist, the show is only a year in the making. With a clarified vision, Girl Versus Corinth could have great promise.

The production is directed by Catie Davis, who has all of the designers and actors on the same page.The staging is best in the musical numbers, and the simple but powerful choreography by Jelani Alladin suits the show. During these parts the actresses shine the strongest, projecting a confidence and attitude that is sometimes lost during the scenes. All of the women seem to have great voices but it is hard to hear them over the blasting electronic music. Occasionally the accompaniment dies down and you can hear their tight harmonies. Murray, whose lower register is more audible in his only solo, has a silky smooth voice that is underutilized.

This strength of this show is in the technical theatre aspects. The lights are impeccably designed by Katy Atwell and sound design by Doug Gillete highlights Baird’s electronic music. Costumes add a lot to the show – particularly the sassy black pant suit worn by Sillers.

But the true star of this show is Video Designer Mark Costello. Costello coordinates video and projection for five televisions and two projection surfaces. Historical images, live video, and prerecorded video  are used and often each screen is projecting something different.  There is always something to watch and appreciate from this solid group of designers.

Girl Versus Corinth is presented by Monumental Productions, one of DCs newest theatre companies.  They have assembled a talented batch of designers and performers for their ambitious first project.  What fun to see a promising new musical in its infancy.

Girl Versus Corinth plays through July 23, 2015 at Catholic University of America: Ward Recital Hall -620 Michigan Avenue, NE, in Washington, DC. For more information and to purchase tickets, go to their Capital Fringe page.