Comedy (according to Steve Martin) is “a distortion of what’s happening, and there will always be something happening.” No truer summary could exist regarding this show; There is always. Something. Happening. Rich Potter, a former Ringling Bros. and Barnum & Bailey clown, successfully and intelligently blends satire, storytelling and variety in this wonderfully original one-man show. 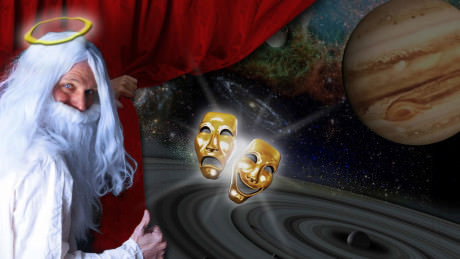 Effortlessly embodying the frenzied charisma of the late Robin Williams, Potter frenetically moves through this cleverly structured narrative, centered around the creation of all things. Dressed, initially, as a more commercial ideal of an all powerful Christian deity, Potter seamlessly transitions between varied representations of this divine being, employing multiple costume changes and personas. From the flowing white robed creator, to a divinity with all the insistent magnetism of a modern infomercial salesman, the quick-change character shifts coincide perfectly with the fast paced flow of this comedic chronicle.

Adept utilization of lighting and sound to create the effect of divinity prove precious in the setting, and add to the unorthodox humor of the entire anecdote. The mark of a true showman is the ability to roll with the punches, the hiccups and the speed bumps that accompany any scale of production and Potter proved a rapid fire, quick witted expert in fielding the unexpected. As far as physical comedy goes, he lends a purposefully bungling vaudevillian character, performing a variety of stunts, and “miracles” with as much practiced finesse as reckless abandon for form with dizzyingly delightful results.

In the span of an hour, (if you subscribe to the more basic principles of relativity) the audience is created, destroyed, transported through time and space, and, for a brief moment, suspended in a void. Some even take part in achieving miracles alongside the show’s host, including ascending into the heavens themselves. Aeons of territory are traversed as Potter takes on Atheism, Stephen Hawking, and even the Kardashians in a story where no one is safe from scrutiny. But it’s all in good fun as this heavenly creator battles multiple crises of identity, from the compulsive consumption of celestial bodies to a good old fashioned case of the blues which can only be cured by…well, you’ll just have to come see the show to find out!

God: The One-Man Show is an irreverent romp through the existential meanderings of an omnipotent being in reflection, whose most impressive miracle is the ability to dissolve an entire audience into laughter.

LINK
Check out the preview article on DCMetroTheaterArts.