Every year the Fringe produces a few real standouts among its more serious offerings. D.W. Gregory’s thoughtful and funny Salvation Road is an excellent example. Anchored by a talented young cast and brimming with intellectual brain food, Salvation Road is a powerful little play about the opaque nature of understanding and belief. 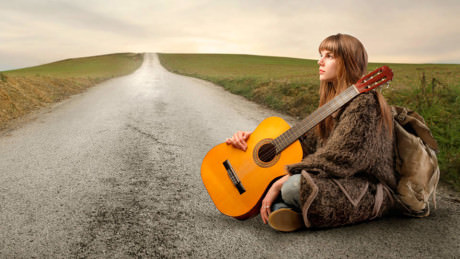 Our main character struggling with these elements is 17-year-old Philadelphian Cliff Kozak, played with palpable energy by a terrific Chris Daileader. Cliff’s older sister Denise (Kaylynn Creighton) has recently disappeared after joining a religious group (read: cult) called the True Disciples. When Cliff’s best friend Duffy (Johnny Weissgerber) spots Denise in a New Jersey college town, it’s decided that the two young men will journey there to find her and bring her home.

Cliff and his Big Mac-loving sidekick receive help along the way from younger sister Jill (Alexandra Yastishock), sensei nun Sister Jean (Kitty Felde), and cult exile Simi (Shaina Higgins). Grant Collins and Grace Eda Baker round out the cast as Elijah and Rebecca, two intoxicating cult members who sink their hooks into Denise when she’s at her lowest.

Gregory manages to pack a whole lot of substance into the play’s brusque 90-minute runtime, adroitly weaving big questions about family and belief into bantery dialogue that’s both clever and revealing. She’s aided by slick direction from Marie Byrd Sproul and an entire cast exhibiting the sort of gravitas that tells you they’ve really done their homework. Daileader in particular stands out as the World War II obsessed teen who fancies himself a strategic genius yet again and again finds himself several stars short of Patton. Collins shines as well in a powerful and disturbing scene in which he stages an intervention against Denise.

Salvation Road is also blessed with a solid squad of designers. Jeffrey Dorfman’s sound design hits all the right notes. Lighting Designer Stefan Johnson keeps our focus exactly where it needs to be. Stephanie Fisher’s costumes — in particular the garb of the True Disciples women — couldn’t be much more perfect. James Raymond’s sparse-yet-effective assortment of set pieces and pops keep the action moving quickly and smoothly, all under Sproul’s keen direction.

What’s most satisfying is how vividly Gregory’s taut drama captures the complicated relationships we have with our loved ones, especially when priority shifts aren’t met with approval or support. What are you supposed to do when a loved one has made a major life decision of which you don’t approve? When should you stop trying to see things from their point of view and start trying to rescue them? Cliff confronts these and other questions during his hero’s journey, and we’re fortunate to be given a chance to hop along for the ride.