As you can probably guess from the title, this is a show about shit.

Mostly literal shit, but there’s some figurative shit thrown in for good measure. The 7 storytellers on Team McVey are full of it. 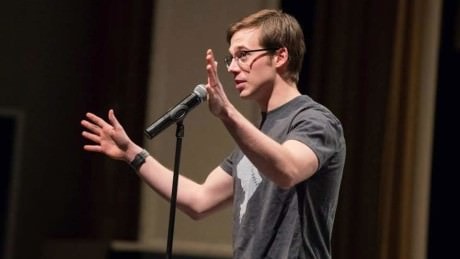 Several of them come from SpeakEasy DC, and were invited to perform by the show’s MC and their coach, Stephanie Garibaldi. The idea for the show itself came from Michael McVey, a native of Scotland who developed it after his wife, Ms. Garibaldi, bought a new car and suddenly noticed everyone else driving the same one.

“Shit,” we were told in the beginning, is the most versatile word in the English language. It’s a verb, a noun, an adjective; everyone has a shit story. “Shit, yeah!” we’re asked to respond when asked if we’re ready.

The playing space is the basement level of a bar in Columbia Heights, with a place to order food and drinks in the back, and, once it quiets down, it’s an intimate space that fits the style of the show well. It’s not exactly standup, but it’s structured like it, with each storyteller presenting a shit story in turn. They are teachers, parents, government employees, students, and each has a unique history.

Poop is a subject that’s more relatable than I expected. There are stories about Catholic guilt, illiteracy, bizarre sexual fetishes (featuring, you guessed it: poop), young love, bullies, the one that got away, overeating…. poop fits into all of them. Sometimes we’re asked to share our own relative shitty experiences, and other times it’s better to just sit and take it in.

This is adults-only, for good reason. And this is definitely not a show for everyone. But they’re all good storytellers, and the stories are heartfelt and funny, connected by a theme of youth – the stories we tell as adults about some of the worst times in our lives, which we look back at with humor and humility.

Shit Stories: The Best of Our Worst Moments plays through Sunday, July 26 at The Pinch – 3548 14th st NW, DC. For more information or to purchase tickets, visit their capital fringe page.