As is implied by the title of Mark Jason Williams’ bleak comedy Straight Faced Lies, the members of the oppressively dysfunctional Ryan family aren’t very good at this whole honesty thing. Nor are they particularly adept at kindness. Or courtesy. Or tact. They’re awful people who do awful things to each other, though Williams suggests dark, hidden truths beneath the surface can explain their rotten behavior. And while you and I are (hopefully) not quite as toxic as these characters, it’s a veritable assertion on Williams’ part that our cruelty towards loved ones can be traced to deeply-rooted pain.

Straight Faced Lies is an ambitious attempt to examine the damage caused by secrets and lies. And although the play doesn’t quite achieve all its lofty goals, there’s enough talent here to make the production worthwhile. 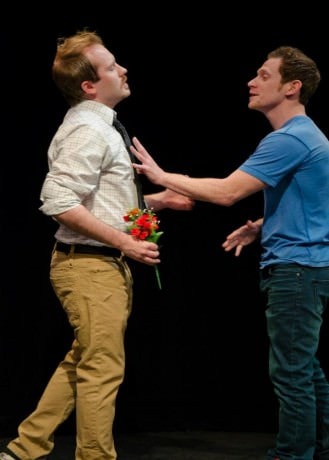 At the outset, the Ryans’ massive web of secrets and lies is quickly woven as we’re introduced to newly-pregnant Melissa (Rachel Manteuffel), her closeted brother James (John Brougher), deadbeat Aunt Marie (Jenny Donovan), and unhinged mama bird Cathy (Kim Tuvin), all brought together for Thanksgiving dinner and Dad’s imminent release from prison. Melissa’s baby daddy Joe (Christian Sullivan) eagerly injects himself into the evening against her wishes, hoping to endear himself to the tribe. James’ boyfriend Kip (Sean McComas) arrives to further stir the pot; he’s intent on outing his horrified lover. While everybody waits for Dad to show up, the three Ryans plus Marie draw their claws, begin tossing barbs, and start spilling each others’ secrets in a bout of familial total war.

The many little jabs are often funny; Williams’ dialogue is saturated with cheeky puns and pointed comebacks. The characters’ gripes don’t vary much throughout the play, though we’re still able to observe how easily each Ryan hits the others where it hurts. Williams works in some subtle musings on the tragic elements of lies and denial. For example: When you rationalize a lie by saying “I’m only lying to protect so-and-so,” aren’t you really just trying to protect yourself? It’s an intriguing motif.

But for Straight Faced Lies to succeed, what’s needed is a glimpse of what the Ryans could have been. We need to see their capacity for love, clues to suggest that these aren’t just wretched people but victims of circumstance. But we’re never given any acts of kindness. There are no indicators of humanity. It’s never revealed that these folks are actually people behind their monstrous facades. We’re told as much, but why should we believe a bunch of liars?

The exception here is Kip, the only character who seems to have a heart. It’s unsurprising then that the real standout among the performers is McComas, who imbues Kip with a potent mix of wry wit and tender honesty. We see him again and again get up off the mat as James continues to deny him. We understand his anguish and empathize with his struggle even if his rationale for loving James (more or less “I just do”) fails to pass the sniff test. Donovan and Tuvin also give memorable performances as the broken sisters teetering on the edge of sanity. Sullivan, a stalwart member of the Rorschach Theatre cabal, does good work as the not-so-squeaky-clean Joe. Overall, there’s not a single weak link in the cast.

Director Ryan S. Taylor, who does great work with Washington Rogues, skillfully moves his actors through Fringe’s awkward upstairs space without the blocking appearing forced. His direction mostly defers to the script — usually a good thing — though in this case a few directorial choices here and there could have really helped shape the characters. For example, the relationship between estranged siblings Melissa and James would have benefited from some extra dimension. Every interaction between the two is tinged with incredulity and disgust. That there’s no visual or action-based counterpoint to this norm denies the audience any reason to invest in them as humans.

Lighting and Scenic Designer Christopher Annas-Lee makes the most out of the as-mentioned awkward space, conjuring a crumbling living room upon an elevated stage. Working table lamps augment the design and establish the necessary mood. Costume designer Jesse Shipley outfits her cast perfectly, from Joe’s trying-too-hard suit to Cathy’s apron-adorned blue suburban dress. The sharp design makes this one of the more polished-looking plays you’ll see in Fringe.

Straight Faced Lies offers keen observations on how deception tears people apart, though its overall execution leaves something to be desired. Still, it’s an often-funny play with some deliciously dark moments and several really nice performances. Williams is obviously a gifted writer (his plays Recovery and The Other Day were well-regarded in past festivals), but if we’re being honest here, Straight Faced Lies isn’t his best showing.