As the audience arrives, they are asked to answer a few questions on note cards, a couple examples being “Who’s got what you need?” and “What places are sacred to you?” Richael Faithful collects these cards before settling into a rocking chair, where she idly rocks herself back and forth while a large projection screen flicks through a number of black-and-white photographs, mostly of families. The atmosphere is a welcoming one. 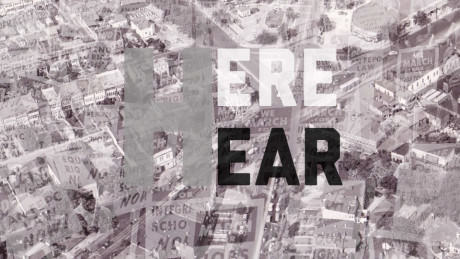 After watching a short video of a woman talking about her life (I must say, the audio needs a lot of work– it was very hard to understand her) Richael begins to read the answers from the note cards aloud. She then encourages audience members (who she refers to as “witnesses”) to join her onstage to discuss these questions. After a lot of encouragement (I’m afraid the particular audience I was in was a bit shy) an open conversation about the history and development of Black culture in DC takes form, as well as sharing ideas about how to effect change. There is a lot of potential  in this endeavor; some good points were raised, and memories shared.

With such a composed atmosphere and serious conversation topics, I do wish that this particular show was given another Fringe venue, and was not instead placed at the very heart and epicenter of the festival. Loud outside noises came in from every side and even from overhead (whatever show was being performed above us must have been riotous), and proved incredibly distracting. It is hard to immerse yourself in a sober moment while whooping and hollering are heard mere feet from you (as well as some shrill screaming that went on for quite a while– I don’t even want to know what show that was!) Also, the audio does need some serious work.

I like the fact that since this show (I wouldn’t even call it a show, more like a social experiment) relies so heavily on audience interaction, each showing will be its own unique experience. This means that your experience could range from incredible to underwhelming, depending on the audience. It’s a risky gamble– but if discussions regarding DC Black culture peaks your interest, then you shouldn’t miss it.

Running Time: 75 minutes without an intermission.