imagine peering into the minds of each person you pass by with as much ease as changing the channel. Interviews With wraps the thoughts and opinions of classic characters and comical stereotypes, some vindictively specific to DC residents, into this hilarious 45 minute long comedy show. 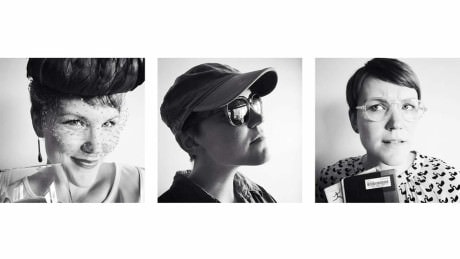 Playwrights Emily Cohen and Daniel Gutstein have captured the thought flittering stream of consciousness that rambles throughout your day. Each vignette follows the highs and lows of different walks of life in an entertaining and satisfying package. You will nod your head in agreement and laugh out loud at the common trains of thought we all share, whether we can admit it or not is another story. Laugh in the face of brutal truth when you fall into one of their categories of “People who Instagram Food” or “Little White Liars.”

The combined chemistry of Emily Cohen, Beth Krause, Rajan Kapoor, and Patrick Slevin was palpable and the way they played off of eachother hinted at the depth of their preparation for this unique show. Even their infrequent breaks in character added an extra element of humor to the room. Their smothered smiles and cut off giggles triggered laughter in the audience every time. It was obvious that this show was a passion project for them and their dedication to it enhanced the reality of each character they portrayed.

Directors Brett Abelman and Emily Cohen guided the movement of each vignette to amplify the mood of each set of characters and each transition flowed seamlessly into the next topic. Working with so many different characters and arrangements was quite the project to tackle, but Abelman and Cohen were so in tune with their show that by the third vignette the audience is primed and ready for each hilarious scene. Under their guidance Cohen, Krause, Kapoor, and Slevin easily changed from one persona to another to another, leading the audience through a merry dance of social commentary and stereotype enforcing one liners.

The live accompaniment by Rogue Collective elevated the the unique performance with their beautifully composed modern classical music. From elegant and seductive to humorous and haunting, their impeccably played accompaniment flawlessly lifted each scene into the next. Each vignette had a wonderfully matched tune and Rogue Collective graced the small stage for two miniature concerts to smoothly transition the show.

Interviews With… earned 4 ½ stars and a Best of the 2015 Capital Fringe honor for more laughs in 45 minutes than you can imagine and its stunning musical accompaniment. It’s perfect for Fringe attendees with short attention spans, comedy lovers, and anyone who has lived in DC more than a few months.