Fittingly enough for Shakespeare, the ensemble plays a troupe of actors rehearsing an offbeat Macbeth in which genders are switched and everything (and I mean everything) is played for a laugh. The Scottish Play within the play is directed by Max (Timothy R. King), a suburban megalomaniac armed with tenacity and the most dangerous weapon in all of theatre: a concept. 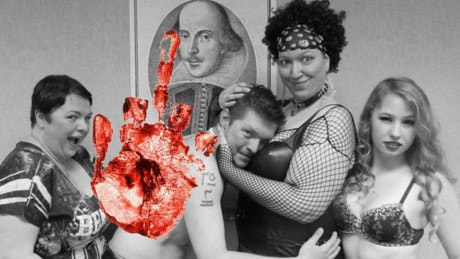 Each character attempts to subvert Max’s controlling vision by adding their own personal wrinkles to the play, whether it be Chelsea’s (Kimberly Pyle) insistence that she dance all of Banquo’s lines or Alison’s (Jacinda Bronaugh) many successful endeavors to portray her characters in the nude. It’s safe to say you’ll be seeing a whole lot more of Lennox and Duncan than in your typical Macbeth.

King is electric as the conceited and overbearing Max, no doubt poking a little fun at himself along the way. Jane Gibbins-Harding is hilarious as stand-in stage manager Susie, a headgear-wearing dork apparently put on this Earth with the sole purpose of annoying her Mean Girl older sister Olivia (Brittany Morgan). Another standout is Emily Canavan, whose character Monica insists on playing Macbeth totally straight despite her castmates’ continued plunge into absurdity. This leads to several terrific bits like Monica’s futile attempts to avoid being upstaged by a twerking, scantily-clad Olivia.

Nikki Gerber, Mitch Irzinski, and Eilidh Pierpont-Pyle round out the cast, each with their own fun quirks and innate abilities to get on Max’ nerves. The onstage action is supplemented by sharp video projections from Randy Philipp and music by Kevin MacLeod. A scene near the end featuring a heavy metal masque serves as testament to the latter’s abilities.

The biggest takeaway from MacWHAT?! is that this group is having a ball performing with each other. As Max notes throughout, the opinions of the audience and critics don’t matter as much as the fact that the troupe gets an opportunity to express themselves. The duality of such a statement is not lost on this writer, so far be it from me to be excessively nitpicky. The purpose of MacWHAT?! is not to be profound. It’s to be amusing. And if you’d find it amusing to watch a group of pals tear off their clothes and riff on Shakespeare, well, more power to you. It is Fringe, after all, so go ahead and let MacWHAT?! satiate your appetite.