Critical Point Theatre’s quirky Fringe show When We Grow Up is difficult to review for several reasons. The piece is highly-interactive and its best moments are improvised, meaning you’ll never see the same performance twice. Plus, the interactive crowdsourcing game at the heart of the piece works best when you’re not aware of what’s coming. That said, Critical Point’s immersive experience should delight Fringe audiences eager to explore the more experimental reaches of the festival’s many selections. 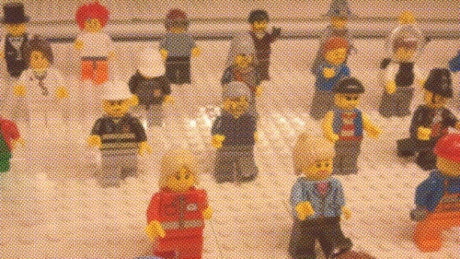 As soon as you walk into the space, the show’s main conceit greets you with a hearty hello. You and your fellow audience members have been invited to Physics PhD candidate Terrance Hinton’s thesis presentation. This maladroit mad scientist in-training, ably portrayed by Trevor Scott, presents a machine that can project images from a parallel universe. In this alternate world, there is no freedom to choose or change one’s career. In fact, any attempt to switch jobs is met with a series of swift and draconian punishments. Naturally, something goes awry during Terrance’s presentation that results in everyone being teleported into this parallel universe.

What ensues is a series of amusing interactions with a motley crew of characters all imprisoned for wanting to change their careers. The piece transitions into an improv-driven examination of professional value, though never in an obtuse or on-the-nose way. The talented ensemble never makes the mistake of taking things too seriously. Rather, their tone is always light and fun, never preachy or forceful. As with most interactive performances, the richness of the experience will depend on just how willing to play along your fellow audience members are.

The players are supported by solid work from the creative team (Dylan James Amick and Jackie Mullen), whose lights, props, and costumes all contribute to constructing the zany world of the play. Director Will Jennings and producer Julia Katz aptly keep the show’s structure just restrained enough to allow for meaningful audience involvement. Alex Burns, Tyler Frech, Rachael Murray, Matthew Schott, Ann Marie Soltis, and Eleanor Webster round out the charming ensemble. Schott in particular shines as a pompous, blue-haired judge and the show’s ostensible antagonist. Armed with an endless supply of witty barbs for characters and audience alike, Schott moderates the latter half of When We Grow Up with aplomb. His performance steals the show in the best possible way.

Despite all the fun, When We Grow Up is not without its minor faults. The show is much more concept than substance and the cast hasn’t yet figured out how to wrap things up in an affecting way. But if you’re into audience participation and keen improv, you can’t ask for much more from a Fringe offering than the silly fun of When We Grow Up.

When We Grow Up plays through Sunday, July 26, 2015 at W.S. Jenks & Son – 910 Bladensburg Rd NE, in Washington DC. For more information and to purchase tickets, go to their Capital Fringe page.