Castaways Repertory Theatre’s presentation of Shakespeare’s Romeo and Juliet will leave you believing in the premise of love at first sight, if ever you’ve doubted it. With standout performances by several actors and a great supporting cast, this Romeo and Juliet was the best I’ve ever seen. And because tickets are free and the play is performed at several venues, there is no reason not to see this captivating play which is now playing through July 25th at three different venues.

Director/Producer/actress Leslie Anne Ross has outdone herself in Shakespeare’s most iconic play. Her directorial prowess is clearly demonstrated throughout the production, most notably during the Capulets’ party, the Juliet on the balcony scene, and the Juliet vs. mad Dad scene.

Ms. Ross’ costumes (yes, she is also the costume designer) are simple, and just suggestive of the time, so don’t come for elaborate Elizabethan costuming.

The bare bones set, mainly consisting of benches, free the actors from material constraints (and I am sure helped to make the tickets free, too).The party includes a dance ensemble piece that induced laughter and clapping and was as unexpected as it was funny. Also at the party, Lord Capulet (Greg Mourad) and Tybalt (Andy Corbley), exchange heated words that set the audience up well for future aggression between Tybalt and the Montagues. As most of us know, the party is where Romeo (Josh Collilouri) and Juliet (Katherine Bisulca) meet. Their encounter at the party was the most real and honest portrayal of an immediate and requited crush that I have ever seen acted.

Mr. Collilouri and Ms. Bisulca’s chemistry was palpable. Sweet, tender, and for the first time (for me), completely believable, they weren’t acting, they were “being.” Their “Romeo, Romeo, wherefore art thou, Romeo?” scene started on a ladder and progressed to the stage in a manner which had us all believing that we were on the balcony with them. Romeo and Juliet’s exchanges of love were a good contrast to the spewing forth of dire prognostications by Capulet (Mourad) to his daughter in a later scene. Some of the finest acting in this well acted play came from the already-mentioned Mr. Mourad. His interactions with Juliet (Bisulca) were frightening because of their physicality and almost-controlled rage. I certainly would have agreed to marry Paris had I been his daughter.

Mercutio (Jason Foster) deserves praise, as well. Although his ribaldry was cringe-inducing at times, his characterization was spot-on. Nurse (Leslie Anne Ross) entertained the audience from the moment she stepped on the stage. Her exchange with Lady Capulet (Diana Mourad) and Juliet had the audience in stitches. Lady Capulet was hoping she would shut up, but we were happy to hear her go on and on and on. You know the end: Romeo and Juliet die.

But if you want to actually touch Shakespeare, you should go see Castaway’s production of Romeo and Juliet. 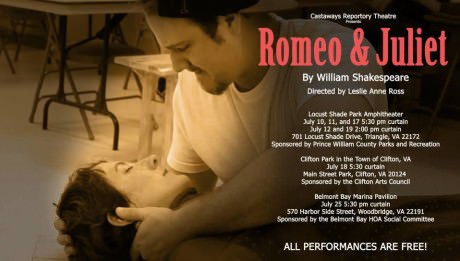 Marguerite Crozier is a homeschooling mom, part-time student, and retired naval officer, and a fan of this production.