The audacious and groundbreaking Landless Theatre Company at the ATLAS Performing Arts Center in NE Washington, DC, performed an exciting “prog-metal “version of Stephen Sondheim’s classic musical Sweeney Todd on a humid, sultry Thursday July 9, 2015 evening at 8 PM. Continuing through August 2, 2015 this demonic thriller, which was given the “go –ahead” by composer Stephen Sondheim himself — continues to haunt one’s psyche thanks in no small part to groups such as Landless that are willing to tackle this stimulating musical. 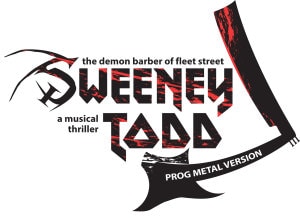 Though no member of the press is allowed to review this production until Mr. Sondheim has a chance to see it, I was very glad to observe the production and to present commentary on the production on DCMTA’s website. Andrew Lloyd Baughman who plays the lead role of Sweeney Todd (and who is also the co-arranger and Producing Director of Landless Theatre Company) very graciously presented his feelings about the role and the production. Below are his intriguing comments:

David Frisic: What factors inspired you in creating your interpretation of the character of Sweeney Todd?

Andrew Lloyd Baughman: I was certainly inspired by George Hearn’s performance as Sweeney, which I watched obsessively on video when I was 13 years old. He was a pretty metal Sweeney Todd, growling like a beast, popping the vocals up octaves when the rage overtook him. We knew that we wanted Metal Sweeney to speak to a new generation of theatre goers – many of whom are only familiar with Johnny Depp’s portrayal of the role – so I definitely wanted to incorporate elements of the more traditional stage Sweeney. I’m still youngish for the role, but there’s nothing pretty about my Sweeney. He’s a shell of the man he used to be, and he learns to stop feeling sorry for himself and fully embrace the vigilante darkness.

Do you see Sweeney as a victim of the Industrial callousness of the period or are you drawing from your own subjective experiences and situations in your interpretation?

I don’t really see Sweeney as a victim. Life dealt him some injustice, but he chooses to embrace the negative path of revenge. He brings about his own destruction.

Is it difficult to juggle the demands of portraying the lead character as well as the duties of Artistic Director of Landless?

Not really. I guess many Artistic Directors tend to be directors, but I’m primarily an actor and I leave direction and design to the members of our team who are best suited for it. Aside from administrative producer details, I have my hand in acquiring and developing the material for performance, but then Melissa takes over as LTC’S Resident Director. “MetalTheatre” is Melissa’s brainchild, I’m glad to see it gathering such momentum.

Do you feel that Sweeney Todd has a timeless appeal to all generations?

I do! I hope cannibalism and murder will always be gross and disturbing.

Do you believe that Sweeney acts out of pure revenge or are there other considerations?

I can see a number of interpretations, but Melissa has directed me (all of us) to tell the story by committing fully to the clear motivations set forth in the text. Every action my Sweeney makes is for the purpose of revenge – until it’s too late.

Next up, I was gratified to glean comments and explication from Melissa Baughman, the very experienced Director and the Associate Producing Director of Landless Theatre Company.  The following are her responses to my questions

What prompted you to think of a prog-metal version of Sweeney Todd?

Melissa Baughman: Since I was a kid, I’ve had a dream of doing Theatre that was Metal. I love Metal and Theatre, and for me the two worlds needed to combine. I’ve been trying to feel out pieces that would lend themselves to my vision of Metal Theatre, and Sweeney just seemed like a natural fit. I’ve loved the show forever and the darkness of the story and music. Andrew and I toyed with the idea for a few years and after the success we had with Frankenstein, we knew the time was right. When you listen to the original recordings of Sweeney, you can hear the Metal in it. And with Sondheim’s complex score, it really felt like Prog Metal to me.

Have you had to stay in constant touch with Steve Sondheim in regards to matters pertaining to the show?

Andrew has definitely been in touch with Sondheim. In the beginning, we had to run things by him, ask his permission to make certain cuts, etc. And now, Andrew will e-mail him occasionally with questions.

What would be the main point you are trying to get across regarding this production (if any )?

I guess the point that I’m really trying to make is more so sharing my vision of Metal Theatre. Metal is a passionate form of music that has structural similarities to Classical. Both tell emotional stories. By selecting Classical-based scores that would not traditionally be thought of as Metal, and challenging ourselves to adapt them into various styles of Metal, it creates a whole new emotional relationship with the script.

Were there any major changes in the text or the score?

We didn’t make changes to the text, other than doing some cuts that Sondheim approved. The score is relatively intact. Sweeney really lends itself to a Prog Metal arrangement, so it wasn’t really a matter of making major changes to the score.

Why is Stephen Sondheim enthusiastic about this production?

He enthusiastically supported us and our vision, and I can only imagine that it is because he wants his work to keep reaching new audiences. That is my guess, but it’s kind of hard to say since I can’t crawl into his head.

Is the show being presented in the manner that you had originally had in your mind’s eye?

Yes. I’m very specific about my vision and I have a great design team: Chris Holland (lights), Jared Davis (set), Devin Gaither (costumes), and Amanda Williams (props) who took my vision and brought their own vision to create a show that was better than what I had imagined.

The arrangement created by The Fleet Street Collective is amazing and I couldn’t have asked for a more talented group of musicians to work on this project.

Cast and Crew are awesome and everyone’s been on board with this vision of a Prog Metal Sweeney. 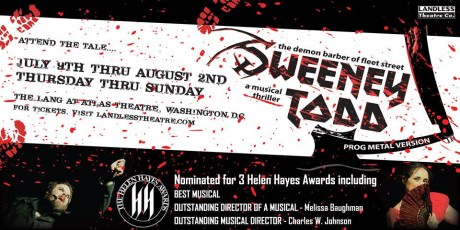 Indeed, these comments from Andrew and Melissa Baughman should give you some idea of the thought and drive that has been propelled into this production. A talented group of actors sing and act throughout—assisted by the Musical Direction of Charles W. Johnson and the marvelous musicians who comprise the Fleet Street Collective. The Scenic Design and Painting is by Jared Davis.

I have had the pleasure of reviewing other Sondheim shows in the metro DC region and how I would long to review this particular offering!

LINKS:
“What, Mr. Todd, What is that Sound?” Arranging The Prog Metal Version of Sweeney Todd, Part One: Andrew Siddle.

What, Mr. Todd, What is that Sound?” Arranging The Prog Metal Version of ‘Sweeney Todd’: Part Two: Andrew Lloyd Baughman.