About halfway through Casey Bauer’s surreal Half Past What?, I came to the stark realization that I wasn’t exactly sure what was going on yet was still completely enthralled. 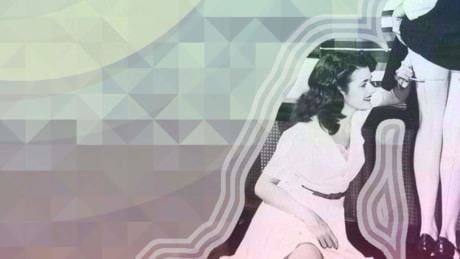 The play is wacky and nonsensical in the best possible ways, perhaps similar to how a particular piece of abstract expressionist art really speaks to you under just the right light. The action and dialogue are abstract (everything is spoken in some sort of wild metaphor) but the rich narrative and vivid characterizations seep through. This is all thanks to three terrific performances by three gutsy actors, as well as the unfettered devotion of Director Jonathan Wong to the world of the play. The audience may not be aware of what’s happening but it’s apparent the actors are, and that dramaturgical coup is what makes Half Past What? a brilliant exercise in form.

We open with the demure Tot (Kathleen Barth) and rambunctious Raf (Cathryn Benson), who immediately establish the wild “reality” of their world. The actresses deliver Bauer’s poetic language with remarkable aplomb, allowing words that in our world mean nothing to acutely insult, enthrall, and aggrieve Tot and Raf in theirs. The two trade emotional volleys, quickly painting a vivid portrait of their whirlwind relationship.

Benson in particular devours the Raf character with a palpable manic energy. “She’s got serial killer eyes,” explains one character, making this writer’s job all the easier. It’s a good thing that Benson’s got Raf down because for Half Past What? to work the actress playing this outrageous character needs to repress all self-consciousness and just go with it. Benson checks all the boxes; hers is one of the stand-out performances in all of Fringe so far.

Barth does an admirable job keeping the more-restrained Tot on the same level as the garish Raf. Tot could easily have been upstaged by her louder, more flamboyant counterpart. Instead, Barth holds her own… and then some. Throughout all their many rapid shifts in interaction, there wasn’t a single decision made by either actress that felt like a stretch of verisimilitude. Chalk up another point to Wong for that.

Eventually we get the entrance of traveling dentist Rif (an effectively nuanced Charlie Cook) and the play really takes off. Cook plays the luring, somewhat-lecherous Rif a few degrees closer to the audience, allowing us a pair of googly eyes through which to adopt a varied perspective of the world. And with three characters on stage, the emotional underpinnings of each interaction get turned up to 11.

I could try to divulge the plot — there’s something about Raf’s ex lover; maybe she’s pregnant or has been pregnant; Tot and Raf both harbor romantic feelings for Rif; yada, yada, yada. That’s really not the point of the thing. What’s most remarkable about this clever little play is its ability to make you feel the narrative, rather than simply identify its many individual facets. Everything from the sterile art studio venue to designer Mary Grant’s effective homemade lighting arrangement helps achieve this goal. By the end of Half Past What? I was able to identify the winners and losers, understand where and when each character made their big decision, and even felt like I kinda’ got it.

The point is that Half Past What? is interesting and different. It’s thought-provoking due to structure rather than content, and that’s a breath of fresh air considering how many “issue” plays are strewn across this year’s Fringe.

If you’re out to see something wild or provocative, or just wish to see three actors fully committed to something crazy, Half Past What? is exactly what you’re looking for.

Half Past What? plays through July 18, 2015 at Gallery O on H – 1354 H Street NE, in Washington, DC. For information and to purchase tickets, go to their Capital Fringe page.