Imagine a pill that could eliminate boredom, stave off writer’s block, inspire the next great masterpiece. In Dr. Freeman’s Motivational Inspirational Pill of a Million Secrets, David Klinger tells the story of how such a pill saved his grandfather’s life and how you can get one of your own. In a time of ever decreasing attention spans, this idea is promising, even intriguing. Unfortunately the performance does not deliver. 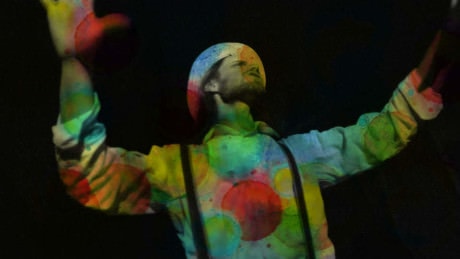 Styled as a pop-up piece, Klinger plays a street hawker/conman(?) and as such, his stage is the sidewalk (in this case the outside space at the Logan Arts Fringe Space though several future performances will be held outside the Brookland metro). This is undoubtedly the right setting for a piece like this, but it causes some problems. It is a surprisingly tech-heavy show; Klinger is backed with an atmospheric piano soundtrack and supported by a number of projected animations, which, when functional, are a clever addition. The moments when the technical elements coalesced perfectly with the storytelling, were electrifying.

Klinger is eventually joined by Sebastian Rousseau, who momentarily brings a much needed burst of energy. The two work well together to explain the further effects of Klinger’s mysterious pill and these scenes prove to be the highlight of the piece. It quickly dissolves however into incomprehensible babble, leaving me feeling like I have missed out on some inside joke

At his first performance at the Logan Arts Fringe Space, Klinger managed to attract a sizeable group of Fringe-going audience members, who have already proven willing to give 30 minutes of their support to experimental “Fringe-y” shows. Certainly he was helped by setting up next to the bar. What I’m getting at is that while the ideas are clearly there, there is still much opportunity for this show to come into its own.

The story was entertaining, the animations intriguing, Klinger himself engaging (if a bit soft spoken), but the overall performance lacked the specificity and well-rehearsed polish to carry my attention, and had I not come for the purpose of watching, I cannot say with confidence that I would have stayed the entire half hour.