When she was alive, I would occasionally discuss love and dating with my grandmother. Her guaranteed formula for finding the love of your life was to “go to the bowling alley–that’s where you’ll find a fella!” Unfortunately, today’s world of dating and mating is not so simple, as is explained through dance in the show The Princess and the Pea (or) A Millennial’s Guide to Dating. 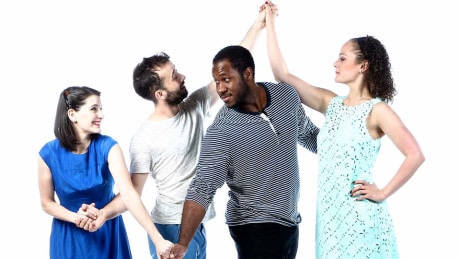 The first half of this show is a parody of the old television show, The Dating Game, now called the tongue-in-cheek “Mating Game” for the Millennial crowd. Briana Stuart hosts the show, encouraging the Pinterest-loving Bachelorette (Director and Lead Choreographer Sarah J. Ewing) to choose between the two Bachelors: uncouth but comical Mat Elder or the educated and classy Thomas Moore. At first, they dance to cute and upbeat numbers to songs like Meghan Trainor’s “Dear Future Husband” (perfect choice), but then the choreography and the show itself take on a more serious tone. Through more impassioned contemporary dance, we see the more primal side of “the mating game” and how even in today’s modern world, there is still a primitive aspect to the process of dating.

Sarah J. Ewing is as beautiful a dancer as she is also a choreographer. She dances with passion and fervor, showing emotion in every muscle of her body.

Briana Stuart’s bubbly personality shows in her infectious smile and her gorgeous movements.

Mat Elder has amazing extension and phenomenal leaps. A double threat, his comedic acting is almost as impressive as his wonderful dancing.

Thomas Moore’s dancing is both smooth and strong. In addition to his incredible talent for dance, his performance during The Marvelettes’ “Too Many Fish in the Sea” shows that he could be a worthy contestant on Lip Sync Battle.

Lighting Designer Adam Bacigalupo colorfully lights the stage during the upbeat numbers and offers more subdued tones during the intense choreography. Technical Director Ivy Chow makes sure that all of the music and other backstage elements run smoothly, although some of the music was a bit too loud for such a small theatre. That along with a few times when the dancers were a bit out of sync were the only hiccups of the entire performance.

Are you ready to fall in love at (or with) a show at the Fringe? Come and see The Princess and the Pea (or) A Millennial’s Guide to Dating!

The Princess and the Pea (or) A Millennial’s Guide to Dating plays through July 26, 2015 at the Dance Place: Carlitz Foundation Theater – 3225 8th Street NE, in Washington, DC. For more information or to purchase tickets, visit their Capital Fringe page.