This is the eulogy I delivered at the the memorial service for DCMetroTheaterArts columnist and reviewer Sydney-Chanele Dawkins yesterday, July 17, 2015:

To Aaron and Sydney-Chanele’s family and friends and colleagues who are here today – and to all of you gathered here today in this House of God – the staff of DCMetroTheaterArts and the DC area theatre community send you their condolences and pray that Almighty God will send you comfort during these difficult times.

For me, my heart is broken and the grief is overwhelming.

But this past week after reading Sydney-Chanele’s interviews and reviews – and reading the many emails we exchanged as she ran around the area reviewing shows, acting as a Helen Hayes Awards judge, producing shows at Port City Playhouse, and writing two very personal columns on our site: The Playwright’s Playground and Cinema Speak with Sydney Chanele, there is much to celebrate, for she did “God’s Work,” and I was lucky to be on that journey with her.

I come from a religious home. My father was an Orthodox Jewish Cantor. I have five brothers and I always wanted a Sister who I could confide in – and someone who would encourage me to move on when times were tough – and I found that person in Sydney-Chanele.

She made me a better person, and after numerous surgeries, and other health issues – Dr. Sydney-Chanele reminded me – no she assertively commanded me – to believe in the greatest doctor of all – God almighty. And with her encouragement and love and faith in God – I was healed.

She talked about living and loving and praising and moving on.

She put her fate in the hands of The Lord, and she kept working and sending in interviews.

She had just interviewed the 5 playwrights and directors at the Contemporary American Theater Festival – and thankfully some of them are posted on DCMetroTheaterArts – and Aaron and I will find the others and we will share them with the world.

This was not a woman who feared death either. Her faith sustained her and her love for theatre and film and her husband Aaron and her family and friends helped her to fight the fight.

Now she has eternal life and she lives on in my heart and in the hearts of all of you who knew her, admired her, and loved her.

And what a legacy she has already. We have her interviews. We have her reviews. And we all have so many cherished memories-so let’s all celebrate her life, and her new life -for she is now at peace – no longer in pain – and she is with her Lord and Savior.

So to start the celebrating let me share this with you:

This was Sydney-Chanele Dawkins’ email address:

And she was fierce battling this horrible disease.

And she was fierce in defending and extoling DCMetroTheaterArts for we were helping ‘The Little Guy’ and we will continue to help ‘the Little Guy” in her memory. And we will found a scholarship in her honor where we will honor young playwrights, who will carry on her legacy.

Sydney-Chanele Dawkins was the Patron Saint of women in the arts-they needed a spokeswoman and she volunteered to do it – and I am here to testify- that she worked until her final breath for that cause.

On July 6th –out of nowhere I received the first of what was to be several interviews with the Playwrights of this year’s Contemporary American Theater Festival and directors.

Please send me a quick email confirmation so I know this has been received. Let me know when it’s up! I’ll be getting in at least two more The Playwright’s Playground columns in this week!

Pretty much the same as last year.

Call me if you have any questions.

Happy to be doing this again!

4 days earlier, on July 2nd, Festival Managing Director Gabriel Zucker of the Contemporary American Theater Festival wrote to one of the playwrights Sydney-Chanele was going to interview:

“A writer named Sydney-Chanele Fierce has been covering the Festival for quite some time now. She usually produces upwards of nine articles each season, which is great publicity.

I realize you are very busy with tech, but could you please take some time and respond to her questions?”

And the playwrights did respond to her questions, and praise God, these interviews will be read and will become part of the treasure of work she produced.

“Many thanks for your generosity and time. I will send you a link to the printed column of The Playwright’s Playground interview on DCMetroTheaterArts.

In March 2012, DCMetroTheaterArts went online. That week I received a resume-the resume of one Sydney-Chanele Dawkins. I got through the first page of the resume, and then the second, and then the third, and as I was about to read the fourth page – I turned to my friend and said, “She has so many accomplishments I am going to need to sell my condo to pay her!”

I called her up and we talked for almost 2 hours as she told me how she was going to help the site – to reach out to women playwrights and women in the theatre who did not receive enough publicity.

I think I got two words in on that call.

I met her – and I will be honest-she was like a tornado. She scared me!

“I will do these interviews, she said. And I have been doing them forever, and so you don’t need to teach me how to interview, but I could use your help making it look good and making it sound clearer…”, and by the end of that first meeting I fell in love with this passionate woman. We were brother and sister after that, and we became one heck of a team. And right to the end – I couldn’t keep up with her.

When she told me she now wanted to do a second column, I asked my webmaster Brett Widmann if there was enough room to handle this prolific writer’s avalanche of articles that were to come.

A few weeks later we upgraded our server.

And we deleted a whole slew of old documents and pictures, and we made room for Cinema Speak with Sydney-Chanele.

And when Sydney-Chanele would send in one of her interviews I would write two things down:

In fact, Brett, my webmaster, spent time working with her to show her how to ‘double-space,’ but as smart as she was – and she was very smart – it was to no avail.

But there was a sign – when I received that interview on July 6th. For the first time –  the spacing was perfect. It was double-spaced – and I looked up to the heavens and I said, “Thank you Lord! I finally have time for lunch!”

There are so many other stories I could share with you but Aaron would throw me off this stage.

So let me end with these Jewish and Hebrew prayers for my sister Sydney-Chanele, and I will do them in Hebrew and in English and I know you will recognize at least the first one. 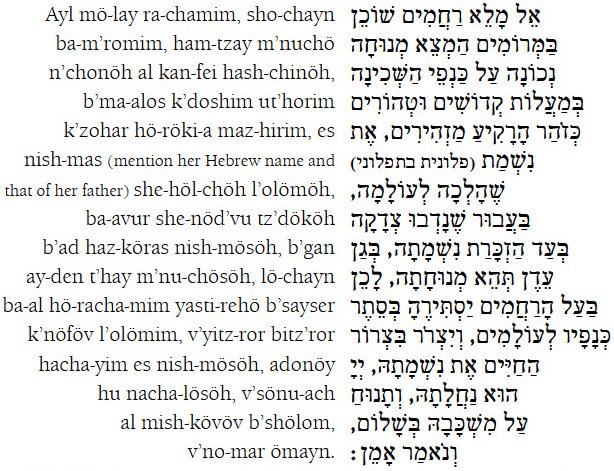 Exalted, compassionate God, grant perfect peace in your sheltering presence, among the holy and the pure who shine with the splendor of the heavens, to the soul of our dear Sydney-Chanele Dawkins who has gone to her eternal home.

Master of mercy, remember all her worthy deeds in the land of the living. May her soul be bound up in the bond of life. May her memory always inspire us to attain dignity and holiness in life. May she rest in peace.

And let us all say: Amen.

And to conclude, please join me in the refrain:

We will Remember Her.

At the rising sun and at its going down;

At the blowing of the wind and in the chill of winter;

At the opening of the buds and in the rebirth of spring;

At the blueness of the skies and in the warmth of summer;

At the rustling of the leaves and in the beauty of the autumn;

At the beginning of the year and when it ends;

As long as we live, they too will live, for they are now a part of us as

When we are weary and in need of strength.

When we are lost and sick at heart.

When we have decisions that are difficult to make.

When we have achievements that are based on hers.

For as long as we live, she too will live, for she will always be a part of us as:

We WILL ALWAYS REMEMBER HER.

GRACE AND PEACE TO YOU- MY SISTER SYDNEY-CHANELE DAWKINS…

WE WILL ALWAYS REMEMBER YOU.

The Playwright’s Playground – The Playmakers CATF 2015: Part 1: Playwright Barbara Hammond on ‘We Are Pussy Riot.’

The Playwright’s Playground – The Playmakers CATF 2015: Part 2: Director May Adrales on ‘Everything You Touch’.

Deadline is Tuesday for COVID-19 microgrants in DC

Arena Stage temporarily furloughs a majority of its staff

Never Miss Another Show! Sign Up for Our Newsletter Today!