A huge, multi-generational cast tells the story of integrating a 1962 Baltimore TV dance show in a musical directed by Tara Taylor that is all heart—and soul.

With book by Mark O’Donnel and Thomas Meehan, music by Marc Shaiman, and lyrics by Scott Wittman and Marc Shaiman, the 2003 Broadway musical won seven Tonys and is based on the New Line Cinema film written and directed by Baltimore’s own John Waters.

The feel-good musical stars Anna Hicks as a big-eyed, spunky, and sincere Tracy Turnblad, who falls in love with the dance show’s heartthrob and decides to audition. While some chide her because of her weight, others love her because of the cool dance moves she’s learned from black kids at her school. Before she knows it, she’s made it onto the cast and into the heart of handsome Link Larkin, played by Jacob Nelson, who has a few cool moves of his own.

Meanwhile, Tracy’s best friend, Penny Pingleton (the versatile Emily Flack) meets Seaweed J. Stubbs (Hassan Crawford), whose Mom, Motormouth Maybelle (Bruni Herring), owns a record shop, and they develop a relationship of their own, to the consternation of their prejudiced friends.

Herring’s song “Big, Blonde and Beautiful” at the end of Act I showed her vocal chops, but the real showstopper comes in Act II, when she sings “I Know Where I’ve Been.” You can feel the heart of Fairfax City—maybe even the whole country—beating when she hits those low notes. It is a communal theatrical moment that is not to be missed.

Jay Tilley plays Tracy’s Mom, Edna with a lot of heart, and her song with hubby Wilbur (Brian Medley), “Timeless to Me,” is warmly sung and nicely danced by both gentlemen. They make an endearing couple.

Ashton Schaffer is convincing as Corny Collins, the strutting host of the TV show. Chelsea Townsend turns in a polished performance as the spoiled Amber Von Tussel, the fading star of the show, and Nora Zanger nails the role of her Mom and show producer Velma Von Tussle. Smarmy show sponsor and hairspray magnate Harriman F. Spritzer is played by David Britt (bonus: he looks like John Waters).

Kudos for good casting to director Taylor and Music Director and Producer Kirsten Boyd and Choreographer Erich DiCenzo  They’ve created an upbeat, cathartic production featuring 19 songs, many with more than 25 performers on stage at once.

With art direction by Penelope Hayes, the set consisted of a giant TV, complete with antenna, that also frames Tracy’s parents’ apartment. In the foreground is the set for the TV show, complete with a rolling, vintage-looking TV camera made of the same pastel materials. With costumes designed by Ashley-Rose Dickey in similar hues, the show feels like a cartoon. Projections by Dan Evans on the screen of the big TV add to the vibe, while lights designed by Jonah Hurley focus the action. 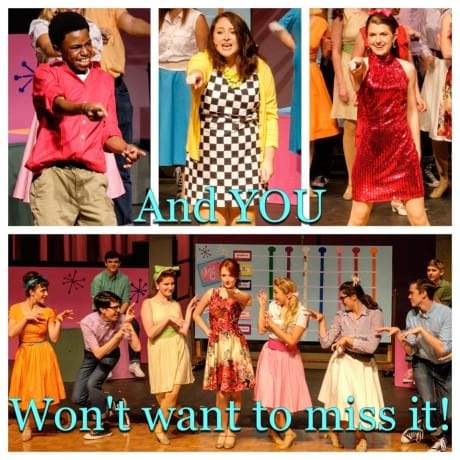 Hats off to whoever worked on hair and wigs, especially Motormouth’s, which is at least two feet tall. They must have used a lot of hairspray. But they won’t run out, there’s an 8-foot-tall can of it in the lobby that makes for a great photo op!

I wish only that this company, clearly beloved by the community, was well-off enough to buy or rent better microphones in order to take its shows to the next level, because they’ve hit on the right formula for community theatre. They even have a state senator’s wife, Sharon Petersen, playing the role of the jailer.

Hairspray plays through July 26, 2015 at City of Fairfax Theatre Company performing at Lanier Middle School -3801 Jermantown Road, in Fairfax, VA. For tickets, purchase them at the door or online.