In this famous, thrilling court-room drama, 12 jurors deliberate over the fate of an alleged murderer. The case seems clear-cut. They open the play with a vote, to see where everybody stands and the result is 11-1 in favor of a guilty verdict. One man, known only as Juror 8, must convince the rest to agree unanimously on a non-guilty verdict. But it’s not just the facts that he must argue. He must also get through his fellow jurors personal flaws: stubbornness, bigotry, impatience and an unpleasant parenting experience. In a room filled with 12 prideful men, tempers flare and the production’s title serves as the briefest of synopses.

The American Century Theater’s production of 12 Angry Men, written by Reginald Rose, is stunningly marvelous. This is theater at its finest.

Mike deBlois’ set has one large, rectangular table surrounded by 12 chairs. There’s a small table with a fan and a water cooler. That’s all that occupies this world. There are no scene changes. It’s not visually stunning – it’s just a jury deliberation room. Besides lighting that changes to suggest the weather outside the juror room, designed by Lighting Designer Marc Allan Wright, nothing on stage changes throughout the play. The color and life of the play, of which there is much, is provided only by the diverse and rival personalities that occupy the seats.

In becoming these impassioned, hot-headed personalities, the 12 actors are superb. There is no weak link in this production as each of the 12 jurors is so completely believable in his role. Additionally, the prison guard, Ellen Dempsey, is also great! Costume Designer Rip Claassen places them all in perfect 1950’s workman’s attire. Most of them also smoke. In essence, nothing is overlooked in terms of setting the scene and time. It is a perfect production.

Juror 8, the hero of the production who stands alone at first in order to talk about the case before voting is played by Steve Lebens. Lebens is the very aura of rational thinking and logic in this production and is a great, level-headed hero.

He is supported initially by juror 9, played by Lyle Blake Smythers. Smythers, the most senior member of the jury, plays his role with a great blend of elderly wisdom and old-man bitter anger. It’s a wonderful performance.

Their counterparts in the play, Juror 3 and Juror 10, who lead the guilty verdict charge, are the exact opposite. They are consumed by passion, rage, and prejudice. Played by Michael Replogle and David Jourdan respectively, both of these outstanding performances are capped by emotional, intensely frustrated monologues and the two actors were so refreshingly believable. The main antagonists, the two of them were absolutely highlights of the wonderful show. 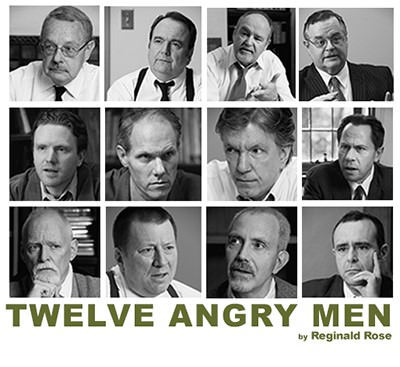 The other jurors, 1,2,4,5,6,7,11, and 12, all were somewhere in between these two groups in terms of pig-headedness and open-mindedness. But each character is so wonderfully complex and the actors all do an excellent job of realistically portraying these characters.

Juror 1 (Craig Miller) is the not-too-assertive foreman who tries, and usually fails, to keep the room organized and civilized. Juror 2 (Steve Ferry) is sheepish and passive. Juror 4 (Joe Cronin) is well-spoken and well-intentioned, even though he’s one of the final hold-outs for a not guilty verdict.

Juror 5 (Evan Crump) is a reasonable young guy who quickly and assertively finds reasonable doubt in the case. Juror 6 (Michael Sherman) is the painter who is always trying to pick a fight, often to defend others. Juror 7 (Bruce Alan Rauscher) is constantly joking around, not taking anything too seriously. Juror 11 (Brian Crane) is a European who is filled with lofty rhetoric and impassioned remarks. Juror 12 (John Tweel) is a marketing man who seems to follow the majority.

The fantastic actors who fill these complex and diverse characters portray each one very realistically, honing in on what makes each juror unique in the room, what personality quirks they have, and how it contributes or hinders the debate.

Being quite simple in story and design, the success of 12 Angry Men as a production is predicated on the stellar acting of men willing to explore the true nature of their characters and bring them to life. Directed by Jack Marshall, the actors in this show do just that and it’s stunning: a glowing performance by all of them and one not worth missing.

So don’t argue, don’t fight, just get on over to see The American Century Theater’s superb production of 12 Angry Men. The facts and evidence all point to it being a wonderful show.

TACT goes out with a bang!

Running Time: One hour and forty-five minutes, with no intermission.

12 Angry Men plays through August 8, 2015 at The Gunston Arts Center at Theatre II – 2700 South Lang Street, Arlington, VA. Tickets can be purchased at the door, or online.