The Meeting is an original play by local playwright Greg Powell and directed by Lori Muhlstein. It will be performed by The Clifton Arts Council on Friday and Saturday evenings, July 24th, 25th, 31st and August 1, 2015 at the Clifton Town Hall -12641 Chapel Road, in Clifton VA. Doors will open at 7:30 PM and the show begins promptly at 8 PM. 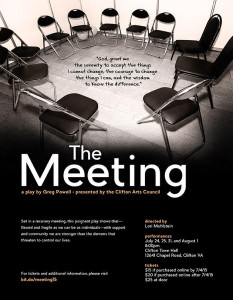 Eric Denver: What is The Meeting about?

Lori Muhlstein: The Meeting provides a glimpse into the lives of the characters that enter a typical addiction recovery meeting. They are real people that could be your neighbors, co-workers, family, or friends. The show allows the audience to witness the strength of the human spirit – to overcome fear and uncertainty, even to risk one’s own life to save that of a complete stranger. That’s really all I can say because you need to witness what happens and there is a surprise ending so I don’t want to spoil that.

You are adept at switching back and forth between being an actress and a director. As the director of The Meeting what experiences do you bring as an actress that have help influenced your direction of this show?

I try to bring to the directorial role what I expect from people who direct me. In particular, I try to model my directing style from those directors from whom I’ve learned a lot. I believe that this is a collaborative effort between the director and the actor. Actors need to develop their character to make it their own. It takes research and love and care of the character to make them real people I understand that process as an actor. I also know that sometimes the choice of the director and the actor may be different so it is important to really work that through so that the final product is both real and believable.

How did your cast prepare for their roles, and why did you require them to do it?

Each member of the cast and crew was required to attend at least one open recovery meeting. For those who are not familiar, an open meeting is just that, it is open to anyone who is interested in the recovery program. I felt it was critical that everyone know what happens in a meeting in order to make it very real. The cast and crew agreed and once they attended meetings, they understood how powerful the meetings were for them and the truth it will bring to their performance. I also spent a lot of time with actors one-on-one to get to know their characters.

As both a director and the writer’s representative, what was your specific vision of the show with respect to community and support?

Although very important to the script, as I mentioned in the synopsis, this show is not simply about recovery. It shows us that despite our frailties, the support of others can help us find hope even in the bleakest of circumstances. It really has an uplifting and beautiful message about community.

This show was performed 5 years ago at the Northern Virginia Theater Alliance (NVTA)  One-Act Competition. How does this version differ from the previous one and why did you modify it?

It differs in several ways. First, the NVTA is a timed one-act competition so we needed to ensure that we came in under 60-minutes (by the way we won Best Overall Production, Best Original, and Best Director that year). Since this is a standalone production this time, we have more flexibility in our performance and can find our “moments” without worrying about time running out. Second, while we have some performers reprising their roles, we have new cast members who bring a different angle to their characters. The ones who are reprising have found new and wonderful things in their performances – their characters have matured so to speak. Finally, we are in a great space at the Clifton Town Hall. Previously we performed on a typical proscenium stage and now we are in a big open room so blocking has changed quite a bit (including additional fight choreography by Matt Bergevin).

Why is the Clifton Town Hall the perfect venue to accomplish your vision for the show?

I really wanted this piece to involve the audience – to make them part of the meeting and enhance the feeling of community. The Clifton Town Hall is a perfect venue. We are using the entire space. The chairs are not set up in straight rows and so the audience completes the meeting circle. In other words they are right there in the middle of all the action. I am very excited with the final results.

How did you cast the show?

As I mentioned earlier, the characters in this show are real people.  Addiction does not discriminate on the basis of gender, race, culture, religion, or sexual orientation. The cast definitely reflects the cross-section of the surrounding community.

Are there any changes in the script for this performance?

Our playwright, Greg Powell, wrote a beautiful and powerful script.  We have stayed true to his words for the most part. Greg and I have a great relationship and where there were areas that during the rehearsal process we felt could be improved, we added or deleted. We both agree that this process helped make the work even more powerful.

You mentioned that an objective of this play is to both entertain and educate. How does this production accomplish that?

I think that good theatre should have that balance – entertain and be thought- provoking on some level.  Last December when Greg and I approached Darrell Poe who runs the Clifton Arts Council, we suggested that this could be a great way to provide a service to the community. Darrell and the rest of the Council were totally on board with that. The show as written is entertaining, informative, and has a great message. In addition, we will have a facilitated panel discussion following our Friday night performances (July 24 and 31) led by a licensed professional. During the discussion, audience members can learn more about how we brought the show to life and the issues addressed.

There are numerous shows as you know in the DC metropolitan area this summer. What might encourage our readers to attend one of the four performances of The Meeting?

This is a wonderful show with a great message I can’t say enough about the dedicated performers and crew we have assembled. We have been working together since the end of February to bring this project to life. I also believe we are the only one performing those weekends in the Clifton area.

On a very personal note, Greg’s (the playwright) wife and young son were in a terrible car accident on June 1st. His son, Carson, who was born with cerebral palsy, suffered a cracked pelvis, broken leg, partially collapsed lung, and a concussion, but he is on the mend. He was transferred to a D.C.-area rehabilitation center.

His wife, Kelly, who is a special needs social studies teacher at Centreville High School, remains in a coma with a traumatic brain injury. Her prognosis is uncertain. Portion of the proceeds from the show will go to the family to help them offset some of their financial burdens that lie ahead. Life is really imitating art in that the entire community is coming together to help this wonderful family. I encourage readers to come out to see our show.

They can go to The Meeting ticket site to reserve the performance of their choice.

There is another post on the DCMTA website about Greg Powell and a Cabaret Benefit they are planning TOMORROW NIGHT on June 27, 2015 for raising funds for health care expenses for Greg’s family.