Summer and Shakespeare go hand-in-hand and Prince George’s Summer Shakespeare Festival’s Romeo and Juliet is a departure from “traditional” productions of this iconic William Shakespeare plays. Produced by Christel Stevens and overseen by Artistic Director Christopher Dwyer, next weekend’s performances can be seen at various locations. The hostilities and tragedies that befall the Montagues and Capulets are well-known and what this production offers is a high-energy and a contemporary vibe that will put you on the edge of your seat.

Romeo (Shane O’Loughlin) is a true romantic spouting lyrical words of love because that is what he believes. However, when he meets and falls for Juliet, it’s as if he is floating on air. O’Loughlin is suave as he swipes a hand through his hair or wraps Juliet in his arms. Theirs is a unquenchable chemistry but it’s not all wine and roses. Romeo and Juliet connect on a different level that is determined and intense as they share laughter and tears.

Juliet (Kashayna Johnson) is an equal combination of spirit and passionate. In the balcony scene, she is fun and flirty, a kind parting from how an anguished Juliet moans over Romeo’s family name. Juliet is loyal to her Nurse (until she turns on Romeo) but the other side of the loyalty is her courageous nature. She trustingly puts her heart and life into Romeo’s hands, even after hearing that Romeo fought with her cousin. An obvious contrast with Juliet is her soft white dress and her ankle-high work boots, where her dress is her purity and her boots are her strength.

Juliet’s caretaker Nurse  (Kimberlee Wolfson) is quite eccentric in this role but she is also the comedic relief with her rude and long-winded language. She resembles a fortune teller in her white blouse and long reddish-orange skirt. That mystical quality shows in her fluid movements about the stage. Faithful to Juliet, Nurse is a loyal go-between Romeo and Juliet but does not understand why Juliet would sacrifice herself for love. Wolfson also takes on the role of Lady Montague, who dies after Romeo is banished.

Capulet (A.J. Calbert) is Juliet’s father and enemy of the Montagues, for unexplained reasons. Calbert is burly in stature but in the first act he does not seem as true to his character as he is in Act II. In the beginning, he comes across goofy whereas Lady Capulet seems to be the stronger parent. However, in the second act, he, as Capulet rules with an iron fist, a booming voice, and actually gets rough with Juliet, demanding she wed Paris (Rob Schumacher). Lord Capulet loves his daughter but he has anger issues, especially when he commands respect and it lacks.

Lady Capulet (Lisa Hill-Corley) has an exotic features and an elegant style, especially in her chiffon red dress. Mother to Juliet, she’s relied on the Nurse to raise Juliet. There may be a part of her that wants to be an effective mother, who married too young (in her teens) and gave birth as well. Yet she encourages her daughter to do the same with Paris. Hill-Corley brings class to this character with poise but Lady Capulet is more concerned with position then purpose.

Mercutio (Briana Manente) rules the stage with wit and biting satire, as he mocks Romeo’s romantic notions of love. Manente is incredible with her stealth moves and feisty wordplay. Manente is a talented actor that has a bright future.

Montague/Friar John (Michael Crowley) seems a little matter-of-fact as Romeo’s father and the continual feuding with the Capulets. It is not until after Romeo kills Tybalt, that Crowley’s emotional pleas come to the surface, begging the Prince to spare Romeo. He appears again at the end of the play to mourn Romeo and even Juliet as both Capulet and Montague shake hands in peace. As Friar John he is given the duty to take news of Juliet’s false death to Romeo in Mantua. Held up in a quarantined house, he fails to deliver the message to Romeo. Crowley’s Friar John is incompetent, but a likable character as his intentions are good.

Friar Lawrence (Manolo Santalla), a Franciscan friar and friend to Romeo and Juliet, he is kind, civic-minded, and clever. A champion for the young lovers, Santalla shows a strength as he councils and devises a plan for Romeo and Juliet to be together.

Paris (Rob Schumacher) is strong in this role but gives the impression that Paris is just caught up in the middle of it all. He is more pretentious than passionate toward his bride-to-be.

Set Designer/Technical Director Mark Wujcik’S set is a mix of city and country with a sharp silhouetted skyline that is more of a modern-day Verona. The steps and balcony indicate a softer side to Verona with curved lines and a sprinkle of ivy.

Composer/Sound Designer Tim Guillot complimented the show with jazz-like instrumental pieces during set changes and some unique sound cues. At first, the police-state sirens seemed odd, but as the production progresses, it blends well. The standout sound is drops of water falling in the tomb.

Choreographer Randy Snight and Fight Choreographer Casey Kaleba did a magnificent job coordinating knife and sword fights that did not cause real blood-shed. Again, in comes the high energy of the youthful cast that puts a new spins on Romeo and Juliet.

Costume Designer, Celestine Ranny-Howes gets two thumbs up for her ingenious costume design that is an update from corsets and tights to jeans, t-shirts and combat boots. There is an urban flair to her design, that depicts the “police-state” that the city of Verona is in. Most of the Montagues wore shades of blue, the Capulets donned red and Romeo and Juliet wore mostly white – an indication of their virginal status.

The cast is as diverse as the audience and that is one of many characteristics of this show that sets it aside from most productions. It’s full of fresh, young faces that catapults the storyline and performances to a new level.

Running Time: One hour and 40 minutes with a 15-minute intermission. 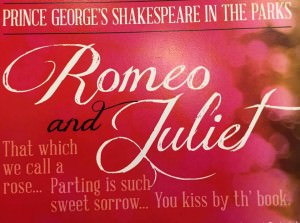 Next weekend’s performance locations are:

July 26th at 7:30 pm at Publick Playhouse, in Hyattsville, MD