These powerful words reverberated in the Clifton Town Hall as myself (and I am sure each member of the audience) recalled our personal experiences with friends and family who have dealt with the issue of recovery.

The diversity of the talented cast was the key to the success of The Meeting, as it reflected that a recovery meeting does not discriminate based on gender, race, religion or sexual orientation. It prepared me even more for the reality of what this evening would not only explore, but have the potential to provide.

Upon entering the Clifton Town Hall, I took note of the somewhat minimalistic set. Five chairs were center stage some filled with toys, others filled with stuffed animals. Signs were plastered on the walls around the room with short cryptic positive messages of encouragement one might associate with recovery lingo. I realized that one should not focus on the set design of the show because the dialogue of the eleven cast members and their sharing among each other would become the lessons learned during the production. I was not disappointed; the evening’s intensity did not subside during this intermission-less gripping drama.

The play’s modus operandi was to listen, evaluate, observe, and analyze the conversational exchanges of each cast member. I now understood why all members of the cast (and crew) were required to attend at least one open recovery meeting in order to have a fuller appreciation as to the roles they were being asked to portray.

As the cast walked on stage, the empty boxes and the stuffed animals were removed. The five chairs now became twelve in a semi-circle as The Meeting begins. Numerous surprises were in store for us as the minutes tick by. Humor was injected into the script at times when you least expected it. Some of the dialogues were gems: “Alcohol is not my biggest problem; I am my biggest problem.” “We’re going to love you until you learn to love yourself,” and “Coming to these meetings is like medicine for me.”

As the plot begins to unfold, we find ourselves at one generic recovery meeting that continues throughout the evening. Pastor Rick (Ted Ballard) is first up whose church hosts these scheduled meetings. He returns at the end to reconfirm that the church, despite what transpires during the evening, will continue to provide the church venue in to prove their support for this important community event.

Pat (Pete Bergen) appeared in the role as the group facilitator for the nine other participants present. Craig, played by Andrew Cooke, made a major speech partially celebrating because he had been alcohol-free for 30 days. Yet, he quickly added that there is a negative side. Due to his “problem, his wife had decided to divorce him and take their two kids with her. Craig, in an emotional downer, shared that he is now afraid he is going to return to his alcoholic remedy. This is typical behavior on the recovery roller coaster.

Congratulations to both Director Lori Muhlstein and Playwright Greg Powell, who have done the community a great service by putting on such a unique play for members of the audience to seriously ponder the recovery conundrum.

The Meeting has only two more performances on July 31 and August 1, 2015 at 8 PM at the Clifton Town Hall – 12641 Chapel Road, in Clifton, VA. For tickets, purchase them at the door or online. 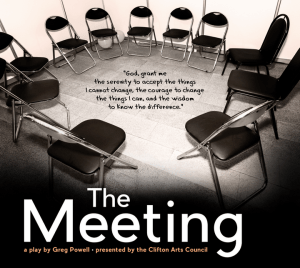 LINK
An Interview with Lori Muhlstein on Directing ‘The Meeting’ July 24-August 1, 2015 at The Clifton Town Hall by Eric Denver.