You know that nightmare where it’s opening night of a play and you realize you don’t know any of your lines and you’ve barely had any rehearsal but the curtain is about to go up to a packed house? Now imagine doing that in real life, voluntarily, with one of Shakespeare’s lesser known plays, and you might arrive at something similar to Taffety Punk Theatre Company’s annual Bootleg Shakespeare. 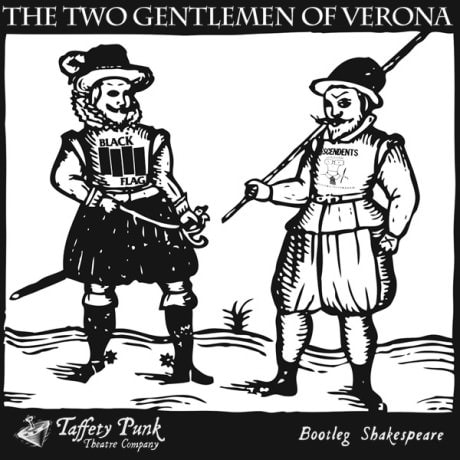 The premise is simple enough: A team of actors, directors, designers and stage managers gather at 10 AM. The show begins at 7:30 PM. This year, Taffety Punk and Director Marcus Kyd, tackled The Two Gentlemen of Verona, one of Shakespeare’s earliest plays, which is widely regarded as one of his weakest.

The play opens at a Bon Voyage party for Valentine (Dan Crane) who is off to widen his horizons in Milan. He invites his best friend Proteus (Shawn Fagan) to come with him, but Proteus is so in love with Julia (Kimberly Gilbert) that he cannot think of leaving Verona. Valentine arrives in Milan and quickly falls in love with the beautiful Sylvia (Tonya Beckman) who is to be betrothed to the flamboyant and hysterical Italian Thurio (Ashley Strand).

When Proteus’s father (or, in this production, his mother, Sheila Hennessey) sends him off to Milan as well, he too falls instantly in love with Sylvia, forgetting completely the vows of love he exchanged with Julia before his depart. He gives away the ring Julia gave him, he betrays Valentine’s friendship utterly, and he forces himself quite unwillingly onto Sylvia in a series of events so outrageous, it’s almost farcical. Proteus is lucky that Fagan plays him with such charisma and earnestness that, though his actions are villainous, he can be forgiven in the end.

In a fly-by-the-seat-of-your-pants endeavor like this, what is especially highlighted is the calibre of the actors, who have done the lion’s share of the work on their own. This cast did not disappoint in the slightest, each showing their ability to play with and deliver with utmost clarity Shakespeare’s words, largely without the help of a director or scene partners or long rehearsals. Beckman especially stood out for her ability to heighten her lines into more than the sum of its words, transforming a rather commonplace “there is my purse” into a highly memorable joke.

The show was of course not without faults, but in terms of doing justice to the play, they are well within their rights: after all, it is widely believed that actors in Shakespeare’s time operated in much the same fashion, receiving their sides not long before performing in front of an audience, with only a few hours of rehearsal in between. These actors were impressively memorized, though many made use of the on-stage prompter to call for their line when needed. But this barely took away at all from the momentum of the performance, one particularly well-timed line call by Strand even managed to earn a hearty laugh from the audience.

But the most impressive part of the Bootleg performance was just how darn fun it was. Maybe it was the audience’s expectations, the free entry, the adrenaline that comes with not really knowing what’s going to happen next, that freed the actors and the audience to enjoy telling and listening to this story completely sans judgement. And an experience like that, far from being nightmarish, is an actor’s biggest dream.

Running Time: Two and a half hours, plus one intermission.