In Part 4 of a series of interviews with The Playwright, Director, and cast of Tying the Knot at the Baltimore Playwright’s Festival, playing at Fells Point Corner Theatre, meet J. Hargrove.

Tell our readers where they may have seen you on local stages.

I’ve been doing theatre all over Baltimore for a while now. Recently, I’ve played Marcellus Washburn in The Music Man and Donkey in Shrek, the Musical, both with Charm City Players. I’ve done shows with many companies in and out of Baltimore. And I did live in Orlando for a few years and you can guess who I worked with down there. I also do readings on a regular basis, mostly through University of Baltimore’s Spotlight UB. I just did a reading there of a screenplay called Chain of Voices by Judith Krummeck. I played a South African slave who led a rebellion. The extreme opposite of the character I’m playing in Tying the Knot.

Tell us about the character you play and how you relate to him?

My character’s name is Lance Kramer, the best friend of Michael Paulsen (Brian S. Kraszewski). Lance is a nearly successful designer with a flair for the dramatic. At first glance, he seems to be one of those characters who is completely self absorbed and all surface with no substance, but he really cares for those around him. He just shows it differently. And I do get the chance to play with his vulnerability. The most obvious thing about Lance (besides his flamboyance) is his humor. He makes me laugh. It was the first thing that connected with me. I think I’m funny (at least in my head) and I always try to make people smile and have a good time. That’s part of the reason I act. Lance is almost this perfect distillation of what can be great about comedy. We laugh at him, we laugh with him, and we laugh through him. It’s not often that you can play with every side like that in one character.

I’ve ended up connecting to Lance in many ways. His relationship with his best friend mirrors the relationship I have with mine, in very interesting ways. My best friend and I play $10,000 Pyramid all the time. It’s fun. You just go to YouTube and find old episodes of Pyramid (or Password… we do that too) and turn the sound off. One person give the clues… You don’t care about all that. Anyway, I have taken some of our quirks to add to Lance’s character, like pronouncing words and names with British or French pronunciation. As campy and over the top Lance can be, I wanted his relationship with Michael to be honest and full of fun. Oddly, bringing some of the stranger things I do with my friends has helped me to ground Lance and make him a real person instead of just a caricature.

What has been the most fun playing Lance?

The meltdowns!!! Honestly, I just love getting the chance to work with Brian again. We worked together in The Last Days of Judas Iscariot, with him playing Judas and me playing Jesus. We just slipped right back into this comfort that we have onstage together. We truly got to play and have fun from day one. We just get each other as actors even though we have different approaches to the craft. I’m so lucky to get the chance to share the stage with such a talented and giving actor and friend. I think the audience with have as much fun with the Michael and Lance scenes as we do.

What have been some of the challenges you have had preparing for your role?

The lines!!! There are so many words. I swear James Beller (playwright) hates actors! I really need to ask him about that. I kid, but there are a ton of lines and I have some tongue twisters in there.

I’m seated for a majority of my stage time and that is a hard limitation to overcome for such a heightened character. Daniel helped us find moments of movement even without standing (although I do stand). He let us explore and encouraged us to follow our instincts. I was also able to play around with my vocal range and find ways to put a lot of meaning behind a simple gesture. This has also helped to keep the character from becoming a complete stereotype (or poor imitation of Jack from Will and Grace). The prep work that Daniel gave us to do also helped ground the character. It’s easy to tell a joke or utter a high-pitched squeal, but finding the reason why is much more difficult. I had to think about why this meltdown is happening, or what was that last thing he talked to Michael’s mother Arlene (Nancy Blum) about. I have answers for it all. Also being mean to the Server (Claire Malkie). I figuratively die a bit inside every time I throw some side eye in her direction.

But the biggest challenge has been watching some amazing performances and not instantly erupting into thunderous applause. I’m lucky to share the stage with so many wonderful actors and James’ writing makes me want to act like an audience member. It’s fascinating.

Which character in the show is most like you?

Probably Michael, if only because of my best friend being a bit like Lance (well my male best friend. I do have a female best friend and I am definitely her Lance). But honestly, I have so much in common with Lance. I’m so comfortable in my skin and it took a while to get here. My friends would say that I’m the friend to come to for some tough love or to play devil’s advocate. I’m the one who always has laughs or some random trivia. And there is also the story about an impromptu dance party during rush hour in the middle of  the roundabout in Towson. Yeah… I’m more like Lance. Or a loud, obnoxious David.

What do you admire most about your fellow cast members?

Every one is so funny. I seriously have been laughing throughout our rehearsals. These wonderful people can do so much with a gesture and it just kills me. Suzanne Young does this sigh that I haven’t been able to get through without laughing. A SIGH!!! That’s true talent.

What has been the craziest thing that have happened on the stage during the run (that was not expected)?

The Collagen Incident... You had to be there.

What does Tying the Knot have to say to theatregoers, and how is it still relevant?

The show takes us to places you don’t expect it to go and it does so with humor and heart. It’s refreshing to know that theatre can still explore the relationships we have with others, ourselves, and to do so without being cliché. This show takes archetypes (in theatre and in life) and turns them on their heads in ways that I think audiences will delight over.

What do you want audiences to take with them after watching you perform in Tying the Knot?

Listen to your friends. They know what’s best for you. And call your mother. 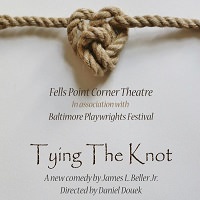 Meet the Playwright, Director, and Cast of ‘Tying the Knot’ Part 3: Nancy Blum by Daniel Douek.

Meet the Playwright, Director, and Cast of ‘Tying the Knot’ Part 4: J. Hargrove by Daniel Douek.