My Fair Lady is the musical based upon George Bernard Shaw’s straight play Pygmalion first presented on stage in 1913. Pygmalion was a sharp criticism on what Shaw saw as a very rigid British class system as well as his commentary on the then growing moment for women’s independence and suffrage. Oh, as for Pygmalion, he is from Greek mythology; a mortal who fell in love with one of his sculptures, which then came to life.

The 1956 Broadway production of the My Fair Lady, with book and lyrics by Alan Jay Lerner and music by Frederick Loewe, took Shaw’s play as its starting point. Lerner and Lowe (later of Camelot fame) gave musical emotions to the story of Professor Henry Higgins who bets he can teach Eliza Doolittle, a Cockney flower girl, to speak proper English and pass into the higher classes. With a score of nearly 20 many-well know numbers, My Fair Lady, was a multi-Tony Award-winning hit, running for over 2,700 performances on Broadway.

Director Zina Bleck has a cast of nearly two dozen hard-working, eager-to-please actors along with an 11-member orchestra under the high-energy baton of music veteran Annette Fakoury. All together as a team, they bring My Fair Lady to audiences at Fairfax County’s James Lee Community Center Theater, located in Falls Church, VA.

Bleck’s cast includes long-time Zamfira Stage trouper, Jim Mitchell as Professor Henry Higgins. With his booming baritone, he can be quite the obnoxious misogynist, as his character is expected to be.  At times he gives off a Groucho Marx-like Captain Spaulding presentation to his acting. There are also several scenes where his being loud and yelling take the place of a more interesting nuanced characterization especially leading up to his discovering himself at a loss in life without Eliza Doolittle. His singing voice work in numbers like “I’ve Grown Accustomed to Her Face” did give off pangs of feelings for the woman he had dismissed as just a lower-class flower girl.

Stacy Crickmer is Eliza Doolittle. She plays her Doolittle not as a demure waif, but as one with plenty of moxie that grows and grows before the audiences’ eyes over the course of the production. She gives off nicely calibrated frustration, not so much anger, with her eyes and facial expressions. Her dialect work went from the nearly unintelligible to perfection as the show calls for.  Her singing voice is “loverly” in numbers such as “I Could Have Danced All Night” and “The Rain in Spain.” I must admit though, I didn’t feel lots of sparks between Crickmer’s Eliza Doolittle and Mitchell’s Professor Henry Higgins that would give-off the “why” for them being together as the show comes to its end.

In the key role of Freddy, the young man who tries to court Eliza Doolittle, is Richard Yingling. Yingling stopped the show with his smooth glowing, solo work singing, “On the Street Where You Live” and his energetic, choreographed by Marji Jepperson, duet with Crickmer for Show Me. There were sparks noticed between his character and the Eliza Doolittle character.

Agreeably turned acting were turned-in by Terry Mason as Colonel Pickering, a good “not stuffy upper-class” pal of Higgins and especially by veteran actor Shelly Kramer in the role of Mrs. Pearce, the more than just a housekeeper and personal assistant to Higgins. Whether with dialogue or just being part of in the moment scene work, Kramer projected a marvelous centering to the production as others flew off into loudness or antics. As Higgins’ mother, Mrs. Higgins, Marji Jepperson looked as if she was having great fun whenever she appeared on stage.

Making his Zemfira debut was Paul Rubenstein playing Eliza’s father.  He delivered several key lines about being part of the “underserving poor” as seen by the British middle and upper classes. He also sang two comic numbers; “With a Little Bit of Luck” and “Get Me to the Church on Time.” On opening night the sound and mic system were not quite right (but technically fixable as the run progresses) and Rubenstein’s numbers faded some. But these appeared to be an opening night technical issues that can be taken care of.

The My Fair Lady ensemble play many roles. They each gave their all in animated work throughout the production; whether singing, speaking, standing-around, or dancing with choreography by Stella Sklar. One key, exquisite scene for the ensemble was in Act II, as they “vogued” their way on stage at Ascot race track. In black and white period costumes including gorgeous hats from Shirley Attanaro and it was a non-verbal, visual highlight of the evening’s entertainment.

The minimalist set designed Jim Watkins used the entire Lee stage and aisles to give off interior and exterior locations for the production. Perhaps it was again just opening night, but scene transitions, set changes and prop movements accomplished in brown-outs seemed a tad slow and tentative. Again, as the run progresses beyond opening night such slowness would be expected to be smoothed out.

For Northern Virginia audiences Zemfira Stages’ My Fair Lady can be a close-by evening out with a musical classic by a team wanting you to enjoy yourselves as they perform just for you. Add to the evening; there is ample free parking and a number of near-by casual restaurants such as Anthony’s Restaurant, Present Vietnamese Cuisine, and the newish FDB Eatery, to name just a few.

Running Time: Two hours and 45 minutes, plus a 15-minute intermission. 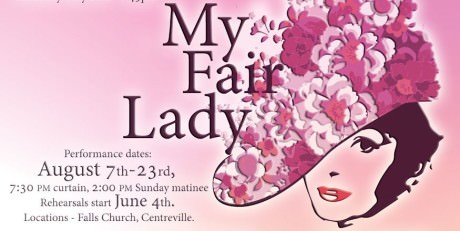 My Fair Lady plays through August 23, 2015 at Zemfira Stage performing at the James Lee Community Center Theater – 2855 Annandale Road, in Falls Church, VA. For tickets, call (703) 615-6626, and leave a reservation, or purchase them at the door.