Heritage Players is celebrating its 40th anniversary this year, and so is its newest production, Really Rosie, which is directed by Stuart C. Kazanow. Written by Maurice Sendak, with music by Carole King, Really Rosie is a children’s’ musical based on several of Sendak’s books, Chicken Soup with Rice, Pierre, One was Johnny, Alligators All Around, and The Sign on Rosie’s Door. The musical is set on a hot July afternoon in New York and explores a day in the life of the children of Avenue P, who, led by the eponymous Rosie, imagine themselves making a movie.

Originally a half-hour animated special that premiered in 1975, Sendak and King turned it into a stage show in 1980, writing more songs and expanding the plot. Like most of Sendak’s work, the story gets a little dark in places,  such as “The Ballad of Chicken Soup,” where Rosie and the others act out the grisly but imaginary death of Rosie’s little brother. But those moments are short, never longer than the length of a song, and always funny. Carole King’s music is eminently hummable and I spent the rest of the afternoon with several of the tunes still rattling pleasantly around in my head.

Heather Harris is Rosie, who dreams of being a big movie star and brings the other neighborhood children into her fantasies. Harris’ Rosie is equal parts melodramatic and charismatic, and it’s easy to see how she convinces the others to play her games.

There’s an artful clumsiness to the whole production, a purposeful mixing of innocence, emotional extremes, and gracelessness particular to childhood. Part of it is inherent to the show itself, and the cast and crew wisely follow the blueprints laid out by Sendak and King.

The costumes, designed by Robin Trenner and Raika Boia, and sets, designed by Stuart C. Kazanow, Ryan Geiger, and Mark Scanga, pull from Sendak’s illustrations and the 1975 cartoon. They effectively underscore that we are immersed in a child’s view of the world.

The music is catchy and well-performed by the small live orchestra and cast. Co-Music Director Stephen M. Deininger  plays piano and conducts. Max Kazanow is on guitar; Teddy Hersey plays bass; Rob Gernsten is on drums; and David Booth is a one-man woodwind section. Robin Trenner is Co-Music Director.

The theater has been made incredibly child-friendly, with play areas flanking the seats. There’s a coloring station, a table full of costumes the children can wear through the show, and even a meet-and-greet with the cast after the performance.

Bring the whole family to see Really Rosie! They have will have a wonderful time!

Part of the proceeds from the ticket and concession sales will be going to two charities: Saint Jude Children’s Research Hospital and The Spring Grove Patient Fund. 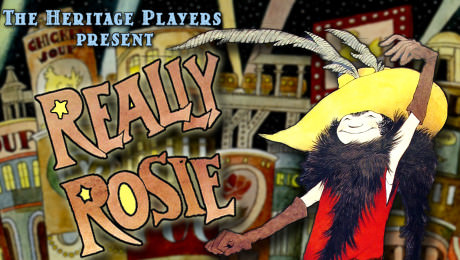 Really Rosie plays through August 16, 2015 at The Heritage Players performing at the Rice Auditorium – at Spring Grove Hospital Center – 55 Wade Avenue, in Catonsville, MD. For tickets, call the box office at (443) 575-6645, or purchase them online, or at the door.