In Part 5 of a series of interviews with The Playwright, Director, and cast of Tying the Knot at the Baltimore Playwright’s Festival, playing at Fells Point Corner Theatre, meet Felix Hernandez. 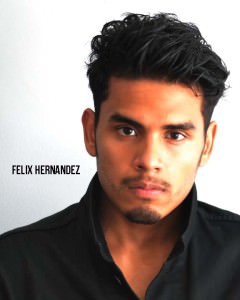 Daniel: Tell our readers where they may have seen you on local stages

Felix: I have been in one other full-length production with the Salem Players. I was Picasso for Picasso at the Lapin Agile written by Steve Martin.

Tell us about the character you play and how you relate to him.  Does this character have any of your personality or traits?

I play the role of David, Michael’s love interest. I relate most to David’s pursuit of targeting the roots of an issue; he confronts things head on and is true to his thoughts. His passions give him the space to explore truths and emotions openly without the need to filter them. If there is any personality or trait at all shared with David, it would be his ability to function on a nocturnal schedule.

What has been the most fun playing this character?

Playing David has me chasing after specific emotional changes and levels of intensity throughout the play. I enjoy the rush of having to go from several different emotions within minutes of each other.

What have been some of the challenges you have had preparing for your role and how did your director help you with these challenges?

Some of my personal challenges with becoming David have revolved around his motives and reactions which are largely different to my own. Daniel Douek has done a magnificent job at helping me read the play with a lens that allows me to glance into David’s character. Daniel and I worked together on my previous role as Picasso and has been instrumental in my growth as an actor.

What have you learned about yourself the actor while performing your role in Tying the Knot?

Which character in the show is most like you, and why?

I believe myself to be most like the Server. The Server is a hardworking student making it in NYC and also secretly talented friend of David. The Server, Claire Malkie, is the secret key to movement in the scenes. Her input is minimal but pivotal in creating a rhythm to the play.

What do you admire most about your fellow castmembers?

I admire my fellow castmembers’ collective ability to keep the ball rolling. It’s taught me to stay on my toes when we’re all rehearsing. They all manage to keep and carry the momentum and also generate it. It’s been fun keeping up with the level of intensity everyone brings to the table.  I also admire and appreciate everyone’s talent. Everyone’s ability has given my role some kind of influence. They are amazing teachers.

What has been the craziest thing that have happened on the stage during the run (that was not expected)?

The craziest thing to have happened is everyone’s appreciation of the chips and guacamole that I had brought in from one of my favorite taco places. To have me fellow castmembers also enjoy this wonderful food combination was awesome. Also, not to mention that one time I was receiving booty shaking lessons from everyone.

What do you want audiences to take with them after watching you perform in Tying the Knot?

After watching Tying the Knot I would like audiences to leave with faith in their dreams, the ones they have at night and the ones they live with and drive them forward  We can learn from and hope that both guide us to a better tomorrow.

What does Tying the Knot have to say to theatregoers, and how is it relevant to today’s audiences?

It’s amazing to be a part of a play that depicts a marginalized community in such a positive and realistic light  I, also, see the show as a story demonstrating the role a family or friend makes in the lives of the LGBT community. The play speaks volumes in the importance in having these support systems both formal and informal in place.

Meet the Playwright, Director, and Cast of ‘Tying the Knot’ Part 3: Nancy Blum by Daniel Douek.

Meet the Playwright, Director, and Cast of ‘Tying the Knot’ Part 4: J. Hargrove by Daniel Douek.

Meet the Playwright, Director, and Cast of ‘Tying the Knot’ Part 5: Felix Hernandez by Daniel Douek.