By Earl Melvin and Michael Harris 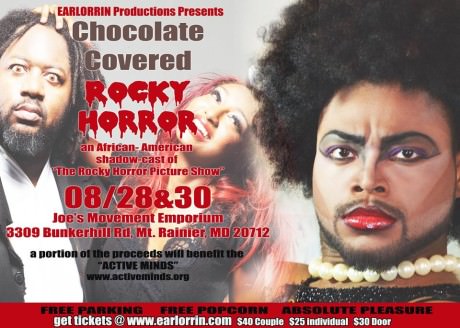 EarlOrrin Productions has developed a cast of extraordinary talented African Americans who have taken this tradition to the next level, by honing on their own specific talents to make the characters come to life. Loaded with nodes to the African-American experience in America, our show will support Active Minds a national mental health advocacy non-profit organization.

EarlOrrin Productions believes that raising awareness for Mental Health will benefit the African-American community, by addressing historical, social, and economic factors. According to the National Mental Health Association, historical adversity, including race-based exclusion from healthcare, education, and social economic resources are disparities experienced by African-Americans today. People who are impoverished, homeless, incarcerated, or have substance abuse concerns are at a higher risk for mental health disabilities. Moreover, according to the Center of Disease Control (CDC) from 2008-2012 the attempted suicide rate between African-American males and Caucasian males doubled from 1.78 to 3.47 per 1 million to 1.96 to 1.31 per million.

In addition, as citizens of a country plagued with gun violence and discrepancies in our justice system, we are enthusiastic to address mental health for the welfare of our audience, community, and country!

Doors open Friday, August, 28th at 9 PM for an hour reception and vendor sales followed by the show. The second show will premiere Sunday, August 30th with a reception at 7 PM with an 8 PM curtain call. Guests are encouraged to come dressed as their favorite characters and prepare themselves for call-back chants throughout the show!

Please come out and support Active Minds and EarlOrrin Productions, help raise awareness for mental health and the arts and humanities with a historic performance of Chocolate Covered Rocky Horror! For ticket information please visit here. To support the arts we strongly encourage you to donate here.

Our cast were recently asked two questions about how is Rocky Horror is relevant, in the wake of the current LGBT-QA movement and what is the significance of your character to today’s society? Check out their stellar responses as allies to the LGBT-QA movement.

Rocky Horror as we all know is a cult classic, it was relevant in 1973 when Richard O’Brien wrote the musical and still relevant today in 2015. As it pertains to the LGBT community and equality of marriage, I believe it’s bigger than that. It’s for everyone, of course everyone should have the right to love whoever and marry whoever. The LGBT movement is just as relevant as the Black Lives Matter movement and all people should be equal whoever you are.

The character I play Dr. Frank-N-Furter is a great example, he’s for everyone. He loves his work and loves sexuality in every form, bottom line is his open-mindedness to people, life, and sexuality. I would even say he should be the mascot for active minds. The national mental health non-profit organization, the freedom of his being is what should be strived for, to be honest in who you are but to be able to form one’s own opinion of life and what it offers in all aspects. We as a people tend to hold things in feelings and what we go through, but if we learn to be “OPEN” the keyword. We will see a difference in life itself. As Frank-N-Furter says “I Hold The Key To Life Itself.”–DeCarlo Raspberry

“The Rocky Horror Picture Show is a fun and corky classic. The show is relevant in the LGBT-QA movement because it sheds light on the various spectrums of sexuality. Today many individuals in the LGBT-QA community struggle to express their sexuality as it has been frowned upon by society for years. One of the main concerns of someone in the LGBT-QA community is being able to truly express who they are while also being respectful to their peers. Society has frowned so heavily upon the LGBT-QA in the past that individuals have turned to alternative ways to deal with the rejection, all that is relative to Active Minds, our philanthropic endeavor.

Janet Weiss’ character is significant in today’s society in a few ways. She is excited by the prospect of finding love, as is any young female in today’s society. It is important for young females to be mindful that love does exist and be aware that it is not shameful to desire such compassion, which Janet Weiss portrays. Janet’s character is also significant in the sense of one finding themselves. She starts off reserved and somewhat shy, but as the show continues she begins to open up. Janet slowly finds herself and evolves into a woman. This occurs very often in the community but the show gives it a platform to be broadcasted without indignity.”–Barrie Monroe

“Although divided, in the past decade public outlooks toward same gender loving and sexual expressive people have rapidly changed to reflect greater acceptance, with younger generations leading the way. Rocky Horror can be viewed as a catalyst for this change since its release in 1975. It helped usher in the movement of self-expression and sexual exploration.

My character, Brad Majors, can be seen as today’s conservative public opinion that tries to block gays and lesbians from everyday civil liberties such as marriage and economic equality. Studies also suggest the LGBT community have higher rates of mental disorders compared to heterosexuals and discrimination may help fuel these rates. With bodies of work such as Rocky Horror and spreading awareness with the help of non-profit organizations such as Active Minds, we can remove the stigma of a divided society and move towards being more united.”–Jeremy Myers

”I love the rebellious spirit it portrays and the melodious scores it delivers. Riff-Raff represents the Machiavellian underdog of a dark and well-orchestrated opera of madness.

From having a mysteriously wild transvestite take in the viewers on the creation of an Adonis to bringing the friskiness out of a wholesomely engaged couple…this is nothing short of amazing!”–Christopher Cortez

”Rocky Horror Picture Show is very relevant in the wake of the LGBTQA movement because it gives a sense of freedom to sexuality. The humor that is presented offers hope to a lifestyle that is often scrutinized. My character, Columbia is very loyal and supportive to the main character, Dr. Frank-N-Furter. Columbia also is one of the first people to be honest and upfront with her emotions and discrepancies of Dr. Frank-N-Furter’s plan to create a muscle man. She is a voice of reason in the midst of controversial actions!”–David Leach

Chocolate Covered Rocky Horror, will be performed on Friday, August 28th at 10 PM and Sunday, August 30th at 8 PM (with a reception at 7 PM) at Joe’s Movement Emporium – 3309 Bunker Hill Road, in Mt Rainier, MD 20712. in Mt. Rainier, MD. For tickets, purchase them at the door or online.