A night of One-Act Plays is always interesting. It gives new or little-known playwrights a chance to shine. It gives new directors a shot at showing their talent. Actors who may never have had a chance at a leading role or don’t have the time to do a full length play can also display their abilities. Silver Spring Stage has a reputation of producing unique and interesting plays and we see that with their 2015 One-Act Festival. 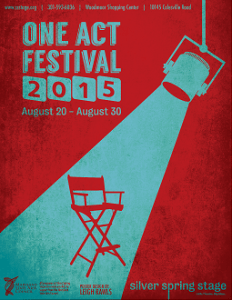 Unfortunately, the plays reviewed in this article will not be performed next week. This group ends tomorrow, Sunday, 23rd and on Thursday, Aug. 27th, Their will be five other One-Act Plays.

The first of this group is called Two by Eugenie Carabatos. The plot is familiar. Two dolls become animated after they are packed away by their owner who has outgrown them. What makes this piece interesting is the wonderful acting of Elbeth Clay and Steven Baird as the two dolls Bernadette and Benjamin. Clay is funny and sympathetic as the selfish, overwrought, and sometimes, suicidal Bernadette. Baird is terrifically understated as the optimistic but realistic Benjamin who is also in love (albeit mostly one-sided) with Bernadette. Both, under the direction of Natalie Tenner, convey the movement of the toys while still making them seem human. Although costumes were not credited, the faded look of the dress and torn sleeve of the boy doll were nice touches.

The second play, The Number, by Barbara Blumental-Erlich, is much deeper. We have all seen plays and movies that deal with the children of Concentration Camp survivors, but this deals with the grandchildren of these strong souls. Two adult grandchildren are dealing with the imminent death of their grandmother, a woman who survived the camps but has hidden this horror as much as she could from her grandchildren. This noble lady hid her number that the Nazi’s tattooed on her arm by wearing long sleeves her whole life. The play deals with how these two, David (Brett Estey) and Miriam (Annette Kalicki), deal with their heritage. Estey and Kalicki do great jobs as they unveil their struggle to deal with not only the loss of the grandmother they love very much but how to memorialize her hardships back in Europe. The interesting direction is credited to David Dieudonné.

With a wonderful laugh-out-loud performance by Kurt Riggs, The Maestro, the first half closes with a roar. The play is a one-man show about a pompous, but new, professional classical orchestra conductor. Riggs is uproariously frustrated by the lack of desire, self-absorption and mental denseness of his players, not to mention union regulations. The performance is even more remarkable when you remember the actor is really giving a very long soliloquy as the orchestra is only imagined. The writing of this very amusing play is by Jacy D’Aiutolo. The direction by Star Johnson is well done as Riggs manages to bring much action while limited to a very small part of the stage where the conductor’s podium is set.

After intermission, the second half opens with what at first seems to be a humorous piece about a retired couple called The Next Move by William Folkes. As the plot unfolds, we discover that the couple, Donald and Roberta, is not just a sit-com duplication. These folks have to deal with really serious issues from their past, the sudden deaths of their children, and present issues of Roberta’s increasing dementia.

Richard W. Blank and Shelley Rochster bring depth to these characters as their problems are slowly revealed to the audience. Blank captures the strength of a man who carries the weight of his losses and now has to deal with the long good-bye to the woman he has lived with most of his life. Rochester is wonderful as Roberta who only hints to us at the beginning that there are mental issues. She gives us little clues, like a sweater that is askew or pants that don’t really seem to fit properly, until the dimensions of her confusion are revealed.

The play is beautifully blocked by Lennie Magida who is directing in her sixth straight year of Silver Spring One-Act Festival. The final piece is a spoof of film noir call Femme Noir by Allie Costa. Eric Smith plays the tough private eye, Ruby Russell, a female Sam Spade. Enter Arthur Tenniel, portrayed by Brendan Murray. Tenniel is trying to prevent his own murder. The two verbally fence around the stage. Tenniel reveals the usual suspects, played by Stephanie Dorius, Leta Hall, and Elise Berg. If more be told, it would give away the ending. However, the interaction of the Smith and Murray is fun to watch. Thomas McGrath’s direction helps create the classic genre of the play.

Hopefully, you can catch the last performance of this group tomorrow, Sunday, August 23, 2015 at 2 PM, but if Silver Spring is true to form, next weekend’s group should be just as provocative and talented.

This is the beginning of an interesting new season at Silver Spring Stage, as it continues to raise the standard of local theater.

2015 One-Act Festival: Weekend One continues through tomorrow August 23, 2015 at 2 PM and Weekend Two starts August 27th and runs through August 30th. at Silver Spring Stage in the Woodmoor Shopping Center – 10145 Colesville Road, in Silver Spring, MD. For tickets, purchase them online. There are also some discount tickets on Goldstar.

Running Time: 2 hours, with a 15-minute with an intermission.