Twice a week in this land of the free, a white police officer kills a black person—this according to under-reported stats from the FBI. From the official law-enforcement point of view, these are considered justifiable homicides. From another point of view, a political one, these are considered extrajudicial killings—lethal shots triggered by racial profiling, not proper police procedure. From yet another point of view, a very personal one, the grief and rage over these deaths, singly and cumulatively, knows no bounds.

With an extraordinary one-act script called A Conversation With the Man Who Killed My Son, Playwright Jacqui Brown has delved deep into those conflicting points of view. She has humanized them, given them the faces of characters who sound and feel real, sculpted succinct scenes propelling a story arc that catches us, compels us, surprises us, and ultimately alters how we see the world. In short, Brown achieves in a mere 45 minutes what every great drama does.

Not incidentally, this singular woman’s voice gives voice not only to mothers who have lost their sons in racist gunfire but to an entire community that is reeling from one son after another thus shot dead.

I witnessed the author and nine other actors perform this powerful play yesterday afternoon before an audience that included community activists and three mothers whose black sons had been killed by white cops.

It begins with a jolt: two raucous street demonstrations shouting at each other. Protesters’ signs on one side say “Black lives matter!” “No justice, no peace!”; on the other, “All lives matter!” “Put your faith in the police!” From there the play leads up to the pivotal scene in which Mildred Barnes (played by Brown) has a private meeting in a police station with Officer George Wilder, Sr. (Terry Gish), who shot and killed her son, Devon, whom George mistakenly suspected of robbery.

Mildred’s attorney, wonderfully named John Lewis Bayard (Master Ashep Herser Neter El), and her cousin Margaret (Gwen Lewis), whose nephew Devon was, try to dissuade her from meeting with the police officer unaccompanied, but she is determined.

The scene Brown has scripted between Mildred and George is electrifying. “Until you’ve lost a child you can’t begin to understand my pain,” Mildred tells him.

George extends his sympathy but maintains he was doing his duty: “He should have obeyed my command. He needed not to resist arrest.” The deadly incident—in which Devon while fleeing reaches for something in his back pocket that George thinks “looked like a gun” but never was—is played out in chilling mime.

As the backstory is revealed, we learn that Devon was a promising young man, not a troublemaker, and that George too has a son, who has been known to mess up. The contrast the script draws between the presumption of guilt that attached to Devon and the pass that George’s son always gets is just one instance of Brown’s great gifts of  empathy and insight. Like the best of writers for theater, Brown stays committed to the authenticity and point of view of each one of her characters.

The play’s truly surprising turn takes place some time after the titular conversation, in an exchange between George and his son George Wilder Jr. (Michael Golder), who is also on the police force. I won’t reveal the twist but it took my breath away, and that of many members of the audience, I have no doubt.

The cast included a Witness to the shooting (Heather N. Brown) whose testimony was never heeded, George’s boss Captain Thomas Gaines (Kevin Youel Page), an FBI Agent (Kenneth Peeples); another white Officer (Carla Castro-Davis), and the actor who appeared as Devon (Kenneth Washington, Jr.)—several of whom with Golder doubled as Protesters. The simply staged production was originally directed by Kofi Owusu for the recent DC Black Theatre Festival.

I became aware soon after the performance began that this work by this playwright was moving beyond words. Its craft, its emotional truth-telling, make it worthy of any theater festival you could name. What I did not foresee was how A Conversation With the Man Who Killed My Son reached and touched and galvanized its audience—the intense and very vocal post-show conversation ran longer than the play. Isn’t that what theater is supposed to do?

I asked Brown afterward whether this play had ever been performed before police officers. Not yet, she told me, though they’ve been invited.

They need to see this. As does everybody. 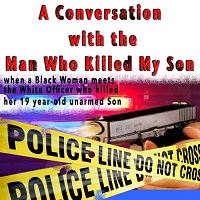 A Conversation With the Man Who Killed My Son played August 22 and 23, 2015 at Dynamic Wellness – 402 H Street Northeast, in Washington, DC.

LINK
Tonight at 6 PM & Tomorrow at 3 PM: ‘A Conversation With the Man That Killed My Son’ at Dynamic Wellness in DC-Reflections from The Cast by Gwen Lewis.